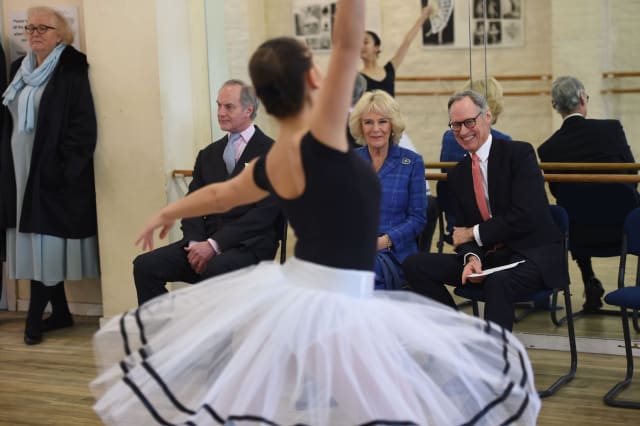 The Duchess of Cornwall has revealed she has taken up ballet and is practising her poses and positions to keep fit in lockdown.

Camilla, in a video call with former Strictly judge Dame Darcey Bussell and broadcaster Angela Rippon, told how she and four friends had been enjoying weekly Royal Academy of Dance Silver Swans classes for around 18 months.

The sessions, specially designed for older learners, are aimed at improving mobility, posture, co-ordination and energy levels and are led by teachers who have been trained to safely adapt ballet techniques for over 55s.

Sharing her exercise regime during the coronavirus pandemic, Camilla said: “I do a combination of a bit of Silver Swans and a bit of Pilates and a lot of walking which I love.”

She added: “We’ve all got to keep active.

“If we don’t we’ll seize up and won’t be able to get out of bed in the morning.”

The duchess, 72, who was announced as the new vice-patron of the Royal Academy of Dance on Wednesday, confessed she had always loved dancing, but never tried ballet.

“Sarah, the wonderful teacher, said to me ‘Would you ever consider having a lesson?’, so I got a group of ancient friends together and the four of us sort of clatter around, and when we’re in London, we do it once a week and it makes all the difference,” Camilla said on the video chat.

She added: “I thought it was going to be very funny and I was going to laugh at everybody toppling over next door to me, but I think we concentrate so hard we don’t even know what our friend next door is doing.

“When I stand there I think to myself, ‘Drop your shoulders, breathe deeply, don’t hunch’.

“It’s those sort of things which you have ingrained in your memory.”

She joked about her future potential as a ballerina, saying: “I’m very, very much a beginner and probably will always remain a beginner, but I do feel after a year, or 18 months, of doing it that maybe I’ve improved a tiny bit.

“But I’m certainly not going to be taking to the stage.

“I shall keep it in my own home very privately.”

It is not known whether the duchess has been participating in online classes while in lockdown at Birkhall in Scotland.

But RAD is offering free Silver Swans sessions every Wednesday at 1pm on its website and social media channels.

The duchess visited the Royal Academy of Dance headquarters in Battersea, London, in February 2018, and declared at the time: “I want to be a Silver Swan.”

She also watched a group of “Swans” demonstrate their steps while on a royal tour of New Zealand, and has since participated in classes herself.

Camilla told Dame Darcey, who is patron of RAD, and Silver Swans ambassador Ms Rippon that the sessions with her friends had been “really good fun”.

She added: “It gives you a certain amount of confidence in yourself.

“It’s just a bit of discipline there, which I think we all need in our lives.

“You might groan a bit afterwards, and huff and grunt and everything else, but you do feel so much better.”

Camilla also described being in lockdown as “very peculiar”, but said her “workaholic” husband the Prince of Wales was carrying on being busy.

“He will work wherever he is, so he’s sitting at his desk now working away,” she said.

The Queen has been patron of the RAD since 1953.