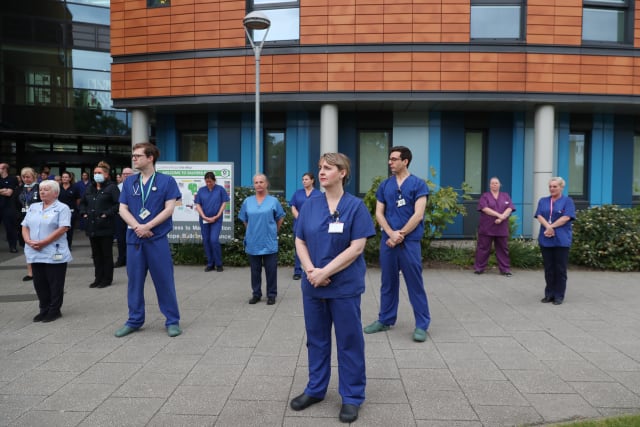 Boris Johnson vowed that key workers who have lost their lives in the coronavirus pandemic will not be forgotten, as the UK fell silent in their honour.

People paused in a sombre nationwide tribute to the sacrifice made by those on the frontline, in roles ranging from doctors and nurses to carers, cleaners, porters and bus drivers.

Healthcare staff, some tearful, bowed their heads in memory of colleagues, followed in some areas by applause, while elsewhere traffic stopped as essential workers in all key sectors were remembered.

Mr Johnson, who has just returned to work after recovering from Covid-19, joined the countrywide commemoration, which the Unison union, the Royal College of Midwives and the Royal of College of Nursing had campaigned for.

Afterwards, the PM tweeted: “This morning I took part in a minute’s silence to remember those workers who have tragically died in the coronavirus pandemic. The nation will not forget you.”

More than 100 NHS and social care workers have lost their lives.

Workers in other key sectors such as transport are also among those who have died while carrying out their vital work during the pandemic.

Dame Donna Kinnair, chief executive and general secretary of the Royal College of Nursing, said: “I am heartened to hear how many people took part in the minute’s silence to honour the memory of staff who have tragically died during the pandemic.

“We thought it was important to pay tribute publicly to those who have lost their lives to the virus, and I am proud that so many took the time to do so this morning.”

She issued an urgent call for protection of workers, saying the death toll must not be allowed to rise further.

“An even greater task now remains – to stop more joining the tragic number of those who have died. All key workers, healthcare staff among them, must be afforded the greatest protection.”

In a snapshot of how the silence was marked across the UK:

– Flags were flown at half-mast from various hospitals including from Chorley and Royal Preston Hospitals and Birmingham Women’s and Children’s Trust’s hospitals.

– Westminster Abbey also fell silent to “honour the sacrifice of health and care workers who have lost their lives in the service of others”.

– Trade unionists and other supporters stood outside Sheffield town hall, carrying placards – some listing the names of those who have died. In Newcastle’s Old Eldon Square, three Unison representatives laid wreaths at the city centre’s main War Memorial.

– Underground and bus networks in London were brought to a halt as the workforce honoured its colleagues while elsewhere some traffic stopped for the silence.

– Outside Salford Royal Hospital in Greater Manchester, some people wiped away tears as NHS staff and Unison campaigners gathered which was followed by applause, with some passing traffic beeping horns and drivers giving thumbs-up gestures as they passed.

– In Northern Ireland, staff in the emergency department of the Ulster Hospital formed a guard of honour in the corridor “to show solidarity with our colleagues”.

Senior nurse Roisin Devlin told the PA news agency: “In healthcare, teamwork is so important and, when you lose a member of that team, it is like losing a family member.”

– In Wales, First Minister Mark Drakeford and Health Minister Vaughan Gething marked the silence with other ministers at the Welsh Government headquarters in Cardiff.

Tuesday’s silence – held on International Workers’ Memorial Day – was in stark contrast to the enthusiastic, loud clapping which has become a weekly focal point across the UK.

Andrea Sutcliffe, Nursing and Midwifery Council (NMC) chief executive and registrar, said: “Our tribute in silence today is as important as the noisy cheering for the NHS, social care and key workers on a Thursday evening.”

The Government has faced criticism over PPE supplies for frontline workers, and Martin Mayer, the secretary of Sheffield Trade Union Council, told those who gathered in the city on Tuesday that many workers “didn’t get the protection they should have had”.

He said: “We stand here sombrely and with great sadness, but with anger in our hearts too.

The Society of Occupational Medicine, whose members include more than 1,700 doctors, nurses, physiotherapists, occupational therapists and technicians, has said the goal should be zero work-caused fatalities.

It is calling for the Government to prevent any further work-related deaths and for employers to carry out risk assessments so people can safely return to their jobs whenever the lockdown is eased.