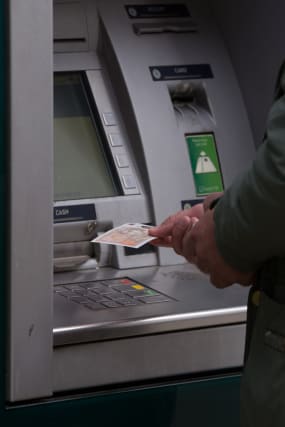 The volume of ATM withdrawals taking place under lockdown conditions is around 60% down on a year ago, according to cash machine network Link.

Over the past month, ATM transaction volumes, on average, have fallen by around 60% compared with the same period last year, Link’s data shows.

But when people do use a cash machine, they are typically withdrawing more money.

The average cash machine withdrawal is now around £80, up from around £65 before the lockdown.

Link said around £1 billion is still being withdrawn from its ATMs every week, through 11 million cash withdrawals.

Its consumer research also found that one in seven (14%) people say they are keeping more cash at home in case of emergencies.

But three-quarters (75%) are using less cash, with more than half (58%) using cash a lot less. However, 23% said they are using the same amount of cash or more.

More than half (54%) of people said they are now avoiding using cash and using alternative payment methods.

More than three-quarters (76%) of people think the coronavirus crisis will affect their future use of cash over the next six months; for example, because they will be using contactless cards more, or shopping online.

Link’s chief executive, John Howells, said: “The fact people are using less cash shouldn’t come as a surprise because, with cafes, pubs, restaurants and some shops closed, people are travelling less and there are far fewer opportunities to spend in the first place.

“However, Link ATMs are still issuing around £1 billion per week to 11 million people. Even if this crisis does lead to less cash use in the longer term, people should be reassured that Link and its members will continue to ensure good access to all who still rely on it.”