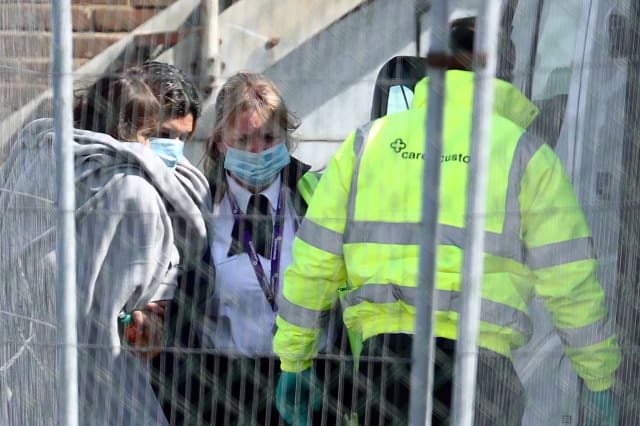 A young child was carried ashore as at least 47 more migrants made it to the UK on Monday.

Pictures taken at the port of Dover showed the new arrivals being assessed by UK staff wearing face masks.

Border Force officers intercepted the migrants in four inflatable boats, and said they were Iranian, Syrian, Kuwaiti and Iraqi.

It comes amid rising numbers of attempts to cross the English Channel in April, as Britain continues life under coronavirus lockdown.

At least 76 people were intercepted by Border Force on Friday in five small boats, with another 35 on Saturday.

At least 911 migrants have made it to the UK so far this year, data collected by the PA news agency shows.

More than half of these (at least 533) arrived in the last month, since the country went into lockdown on March 23, PA analysis indicates.

On Monday the Home Office repeated assertions that the pandemic is not affecting its ability to respond to migrants.

It said: “Coronavirus has had no impact on our operational response to small boat incidents. Border Force and Immigration Enforcement will always have the resources needed to tackle these illegal and dangerous crossings.”

Migrants brought ashore in Dover are assessed for symptoms of Covid-19 but not routinely tested.

There have also been fresh concerns in recent days over “heartbreaking” risks posed to children trying to cross the busy shipping lanes, with at least three brought ashore on Friday.

Stephen Hale, chief executive of charity Refugee Action, said on Friday: “It’s heartbreaking that people including young children are having to risk their lives to seek refuge in the UK due to a lack of safe and legal routes to get here.

“The Government must stop talking tough and start thinking smart.”

Pictures taken in Dover on Monday morning appeared to show a young child being brought ashore in the arms of a suspected migrant and then being processed by border officials.

The Home Office has refused to provide information on how many of the migrants brought ashore on Monday were children.