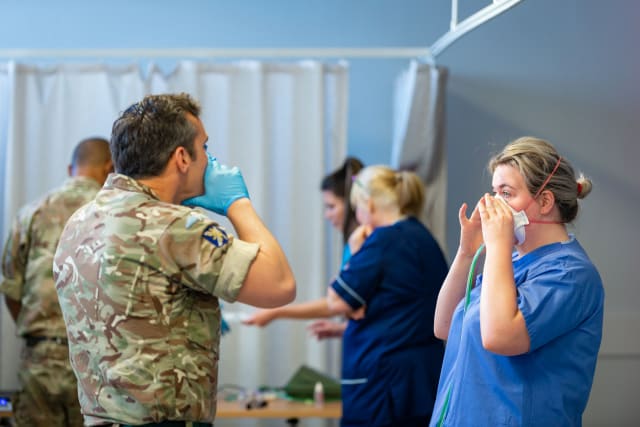 Soldiers have been drafted in to help test personal protective equipment (PPE) for nurses at four hospitals in and around Glasgow.

The Scotland-based chemical, biological, radiological and nuclear (CBRN) instructors are helping staff at NHS Greater Glasgow and Clyde as part of measures to protect frontline workers from coronavirus.

A group of 20 soldiers are helping test the fit and functionality of the PPE for doctors, nurses and healthcare assistants across the health board.

The hospitals are Glasgow Royal Infirmary, the Queen Elizabeth University Hospital, the Royal Alexandra Hospital and the Inverclyde Royal Hospital.

Defence Minister Baroness Goldie said: “The soldiers are part of the MoD’s support to the Scottish Government and NHS Scotland in our battle against coronavirus.

“Today this sees 3,000 military personnel deployed to support the civil authorities across the UK.

“Our tasks include military personnel providing specialist planning and advisory roles across the Scottish Government, liaising with each of Scotland’s 14 health boards, providing additional helicopter airlift capacity for patients in remote and island communities, and being part of the multi-agency teams providing drive-through testing centres at Scotland’s airports.”

Support in testing PPE will run initially until May 17.

It comes after military personnel also supported the creation of the NHS Louisa Jordan hospital at the Scottish Event Campus in Glasgow.