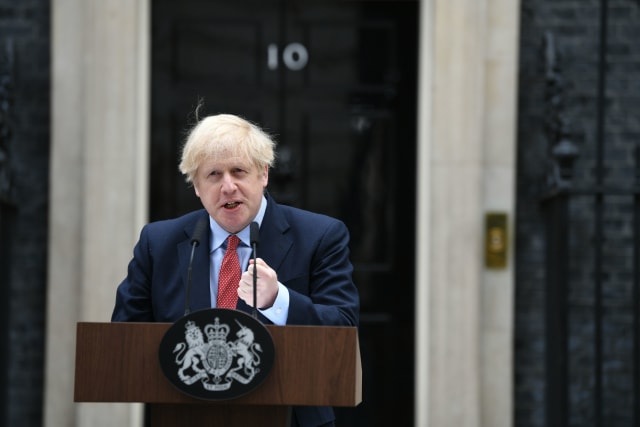 The Prime Minister has labelled coronavirus an “invisible mugger” after his own personal experience facing off the deadly illness.

Boris Johnson returned to work on Monday after convalescing for two weeks at Chequers, the PM’s country residence, following his discharge from hospital.

The 55-year-old spent three nights in intensive care following his admittance on April 5 to St Thomas’ Hospital in central London, and later revealed his struggle with Covid-19 “could have gone either way” during that period.

Speaking outside Downing Street to mark his return, Mr Johnson said he was “sorry I have been away from my desk for much longer than I would have liked”.

He said the UK was on its way to tackling coronavirus after social distancing measures had ensured the NHS had not been overwhelmed during the peak of the infections.

Mr Johnson said: “If this virus were a physical assailant, an unexpected and invisible mugger – which I can tell you from personal experience it is – then this is the moment when we have begun together to wrestle it to the floor.”

While at Chequers last week, the Conservative Party leader was in regular talks with those leading the UK coronavirus response, including Foreign Secretary Dominic Raab, who was deputising for the PM, but this week will see him leading the Government in public once again.

Health Secretary Matt Hancock, another leading figure in the battle against Covid-19, responded to Mr Johnson’s public appearance, tweeting: “Great to see the boss back and on top form.”

Nadine Dorries, the first minister to be diagnosed with the virus, said the PM was back to work quicker than many others would be in his situation.

“Most who have been as poorly as Boris Johnson with Covid-19 and a patient for a week in intensive care would be off work for at least three months to fully recover their strength and repair their immune system,” the health minister tweeted.

“Our PM is back after just three weeks. Good luck boss.”

Edward Argar, a fellow health minister, said he was “hugely pleased” to see Mr Johnson “back at work today with his health fully restored”.

He told BBC Radio 4’s Today programme the PM would be “looking very carefully” at how to lift the lockdown measures now that he was back at the helm.

During his speech outside Number 10, Mr Johnson promised “transparency” over future decisions on social distancing and vowed to involve businesses and opposition parties when deciding a way forward.