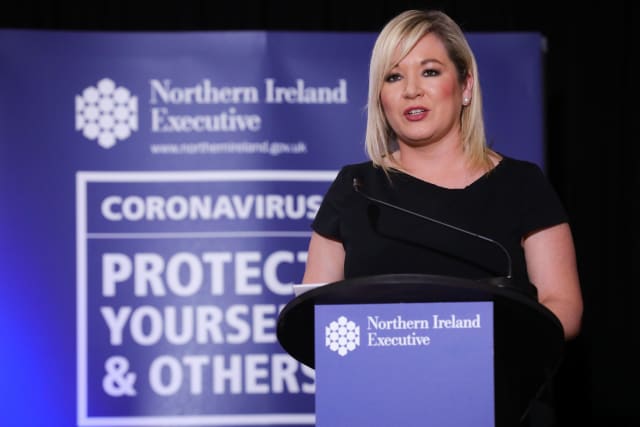 People starting to flout coronavirus rules in Northern Ireland are wrong, reckless and are putting lives in danger, the Deputy First Minister has said.

Michelle O’Neill said there was evidence of more traffic on the region’s roads, with signs people were starting to relax their approach to certain restrictions.

She said if those trends continued there was a risk that progress to halt the spread of the virus would go into reverse.

The Deputy First Minister warned that the executive may be forced to “reset” and go back to the start of lockdown measures if such behaviour continued.

Asked if Stormont may beef up restrictions or introduce stiffer penalties, Ms O’Neill said the issue of enforcement had been discussed at a meeting of the Civil Contingencies Group on Monday.

“With each day that passes we learn more about the impact of this disease and the devastation it is causing, so it is disappointing to hear reports of some people who seem to have decided for themselves that it’s time to relax the restrictions that are in place to save lives,” she said.

“Can I just say that kind of attitude is wrong, it’s reckless and it is endangering lives.

“Until a vaccine is found it means we must co-exist with this virus and that means a radical change to how we live our daily lives for some time.”

Ms O’Neill said there was “light at the end of the tunnel” in the coronavirus battle but there was a distance to travel before the disease was beaten.

The coronavirus death toll notified by hospital trusts to the Northern Ireland’s Public Health Agency rose to 309 on Monday, with a further ten deaths reported.

Ms O’Neill said that figure increased to 412 when suspected cases recorded by the Northern Ireland Statistics and Research Agency, many of which occurred in care home settings, were factored in.

First Minister Arlene Foster said people could not let impatience get the better of them, warning that to do so would be to gamble with lives.

She also reiterated the warning from Prime Minister Boris Johnson that government may be forced to “slam the brakes” on any move to relax the restrictions if people try to return to normal too quickly.

Mrs Foster said Northern Ireland was “not out of the woods” and cautioned against a “rush to the exit door”.

“Now is not the time for government, for businesses and for individuals to gamble with people’s lives and we need to proceed cautiously and ensure we are doing everything we can to prevent another spike for occurring,” she said.

The First Minister added: “We still have some way to go, if people go back to gathering in large numbers and public spaces and don’t listen to the guidance on social distancing, then they run the risk of another spike.

“Having come so far in containing this disease it will be more than just a crying shame to undo that collective effort. It will be catastrophic for families, for communities and for society as small as Northern Ireland’s.”

The DUP leader stressed why ministers were repeatedly urging people to abide by the guidelines at their daily media briefings at Stormont.

“We’re not here to entertain, we’re here to warn and we’re here to protect the people of Northern Ireland which is why we are giving out this very stark message – that we are at a critical point and if you start to think that you can go out more often and you can meet up with people then you are putting yourselves at risk and you are putting wider Northern Ireland at risk,” she said.