Nightingale Hospital provides ‘another layer of armour’ to NHS – Hancock 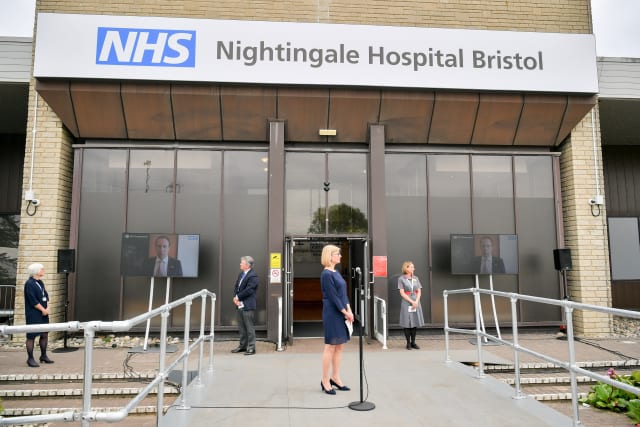 Bristol’s Nightingale Hospital will provide “another layer of armour” to the NHS as it copes with the coronavirus pandemic, the Health Secretary has said.

The facility, based at the University of the West of England’s Frenchay Campus, was opened by the Earl of Wessex in a virtual ceremony on Monday afternoon.

It will provide up to 300 intensive care beds for coronavirus patients – six times the intensive care capacity of a large hospital in the south west.

Health Secretary Matt Hancock, speaking in a video played at the opening ceremony, said the Nightingale hospitals across the UK were to ensure the NHS’s founding principle that “it will always be there for anyone who needs it”.

Mr Hancock said the fact that the Bristol hospital had been built within three weeks was a “testament to how much everyone believes in that core mission of the NHS”.

“Thanks to this place, the NHS has another layer of armour to protect it from the worst of this virus,” he said.

“We all hope those extra critical care beds will not have to be used.

Staff are being drawn from within the NHS and from across a range of organisations.

In a video message to officially open the hospital, Prince Edward offered his “sincere congratulations” to those involved in constructing it in 24 days.

Edward referenced how Frenchay had been used as a US military hospital during the Second World War, with many wounded Americans treated there after D-Day.

He said that once again a “huge debt of gratitude” was owed to those working in the health service, whatever their role, and paid tribute to people with coronavirus and their families.

“It is a somewhat curious experience to be asked to open a facility which we hope will never be required,” he said.

Edward said those assigned to work at the hospital were “maintaining the ethos and values” of Florence Nightingale and Mary Seacole.

Sir Simon Stevens, chief executive of the NHS, said the opening of the hospital marked an “extraordinary act of teamwork” that included the military, civilian contractors and local government.

“Fortunately it now looks as if, thanks in part to the actions the public are taking, we are coming through the peak of that number of hospital beds, but we know that coronavirus is going to be with us for months if not years to come,” he said.

“And we also know that there is going to be continuing pressure on services meaning that the capacity that the Nightingale hospitals represent will be useful to have not just over the coming weeks but potentially over months beyond that as well.

“For those who say we’re not going to need to fill up every Nightingale bed, we say, of course, it makes sense to hope for the best but nevertheless to prepare for the worst.”