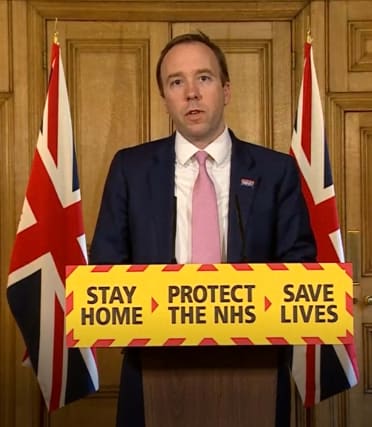 There is still more work to do to hit the Government’s 100,000-a-day testing target by the end of the month, but numbers are “broadly where they are expected to be”, Health Secretary Matt Hancock said.

The Government has come under increasing pressure in recent days to reach the target by the end of April, with just 37,024 tests carried out on Sunday.

It came after the Prime Minister’s spokesman had earlier said it will be “difficult to know” if the coronavirus testing target had been met.

But Mr Hancock told the daily Downing Street press conference: “It is important to note that we have already gone past the number of tests, per day, for instance, that they carry out in South Korea.

“We are approaching the levels that Germany undertakes.”

Mr Hancock added that the 100,000 daily tests promised by the Government would be enough for the “test, track and trace” plan which would be part of the next stage of the coronavirus response.

He said: “The lower the number of new cases, the more effective a system of test, track and trace of any scale is.

“Therefore, 100,000 tests a day is a big enough testing system to start test, track and trace, but if it is bigger then the system can work on a higher number of cases and be more effective.”

More than 10 million essential workers and their households are now eligible for Covid-19 checks through a variety of options, including drive-thru tests and home kits.

Downing Street played down expectations that it will be clear whether or not the Government has reached its testing target this week.

The Prime Minister’s spokesman said it will be “difficult” to know on Friday, adding: “For example, home testing kits can take up to 72 hours to get the results for, and therefore show up in the numbers.”

While home testing kits were unavailable after 9am on Monday, drive-through tests in England and Scotland were both still available.

He told BBC Radio 4’s Today programme:  “We will have to be able to test all those people (declaring via apps that they are displaying symptoms) and it is really a matter of scale and speed.

The Department of Health and Social Care (DHSC) said patients and health and social care workers had been prioritised for tests from the beginning of the testing regime and would continue to be.

Test booking slots or home testing kits will become available from 8am each day, the DHSC has said, with their release staggered throughout the day.