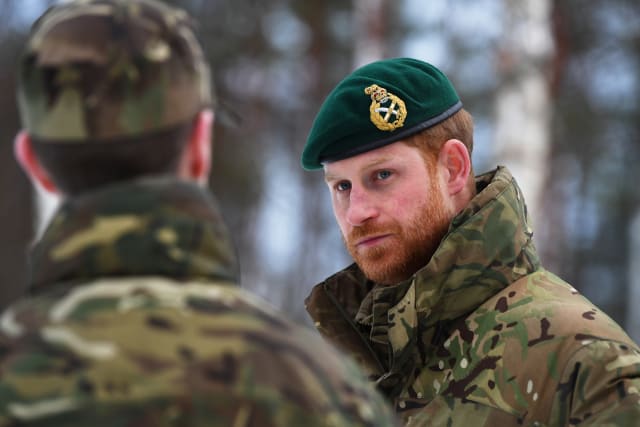 The Duke of Sussex has spearheaded a new mental fitness tool aimed at helping the military with their well-being.

Former soldier Harry appears in a video on HeadFIT.org, which has been designed to offer round-the-clock access to self-help tools to enhance mood, drive and confidence.

The Queen’s grandson, who is now living in Los Angeles after quitting as a working royal, urges members of the armed forces to train their “mind and body as one”.

The project, led by Harry, has been three years in the making.

It was due to be unveiled in June but its launch was brought forward to help service personnal tackle new challenges during the coronavirus pandemic.

“Today, when we talk about fitness, we don’t just mean how fast you can run or how much weight you can carry,” Harry says in the footage.

“This is about mental fitness, strength and resilience, not just while wearing a uniform, but for the rest of your life.

“If you want to be truly fit, strong and healthy, you need to train your mind and body as one. Some people run, others swim, cycle or lift weights in order to be physically fit.

“But what do you do to stay mentally fit? Think about what you can do to unlock your potential, and to perform at the highest level.”

HeadFIT has been developed in partnership with The Royal Foundation’s Heads Together campaign, the Ministry of Defence and King’s College London, with clinical advice from psychologist Dr Vanessa Moulton.

Harry and Meghan have since stepped away from the monarchy to pursue a life of personal and financial freedom in the US.

The duke’s military appointments, including his position as Captain General of the Royal Marines, have been put on hold for the next 12 months.

In a statement, Harry said HeadFIT has been almost three years in the making.

“I’ve long believed the military community should lead the way for the rest of society,” he said.

“For too long we have been waiting for problems to arise and then reacting to them.

“HeadFIT is a proactive approach to mental fitness, focusing on our own potential to increase our performance, using proven methods in sport science.

Defence People and Veterans Minister Johnny Mercer stressed the importance of helping troops with their mental health during the coronavirus crisis.

“We train our armed forces to be both physically fit and mentally fit,” he said.

“And right now mental resilience has never been more important as our defence community works tirelessly to support the UK’s public services during the coronavirus pandemic.”

The platform includes tools such as breathing exercises, body posture and relaxation techniques and was designed for all defence personnel from new recruits, long-serving personnel and veterans to civilian staff and those in uniform.