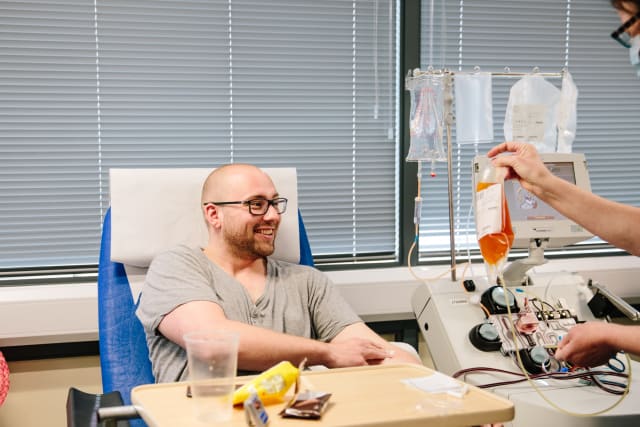 Patients who were struck down by Covid-19 and have now recovered have spoken of their willingness to help others as part of a blood plasma trial.

Rebecca Mascarenhas, from Kingston, south-west London, fell ill after caring for her husband while he was suffering with Covid-19.

Her own signs of illness did not come until two days after her husband was admitted to Kingston Hospital on March 11.

“It’s such a small act in the grand scheme of things and the impact it could have on someone’s life… I had to do it, I wanted to help in any way that I could,” the 33-year-old HR worker said.

The mother-of-two told the PA news agency: “My journey with Covid-19 when my husband went down with it, he had a persistent temperature which wouldn’t go down, aches and pains… I was looking after him when I contracted it.

“He was admitted to hospital with it and while he was in hospital, that’s when I went down with it when I was at home with my kids trying to look after them.

“Thankfully I had fairly mild symptoms – three days of a temperature, a tightness of chest where I couldn’t take a full breath and a persistent cough.

“My son also got it, he had seven days of a temperature of around 40C.

“My husband was in hospital at the same time and I didn’t know whether he was still OK.

“He was really lucky – he was only in for a week and he was very close to being sent to intensive care, but thankfully pulled through.”

Ms Mascarenhas and her husband both tested positive for Covid-19 and signed up to donate plasma.

“It was a really good experience,” she said.

“If there is anything in my blood that can help, I definitely wanted to be involved.”

Adam Drew, 25, from Chessington, fell ill early on in the epidemic, on March 9.

The 25-year-old police officer managed his symptoms at home and did not need to be hospitalised.

“It was like having a strange version of the flu, it started with a temperature and cold sweats and chills for one or two evenings,” he said.

“Then for about five days I had a headache behind the eyes, muscular aching and then general fatigue, to the point if I was laying still or sitting still I was OK, but if I moved I was knackered.

“I had no sore throat or cough but I did have a shortness of breath. If I took a deep breath I had like a pain in the chest which felt like it was bruised from the outside.”

Mr Drew was tested for Covid-19 by a nurse in the pods in the car park of Kingston Hospital, adding: “I was never scared because at that point, nobody young had died at all.”

He was contacted by the NHS last week to take part in the blood plasma trial which could potentially help those who are seriously ill with coronavirus.

“The only bit that hurt was the needle going in and the plaster coming off, but the actual process itself was painless.

“I wouldn’t hesitate to recommend it to anyone.

“It’s really important because this looks like one of the only things at the moment that could work as a treatment.

“There doesn’t seem to be any real alternative currently, so I’m hoping it works.”