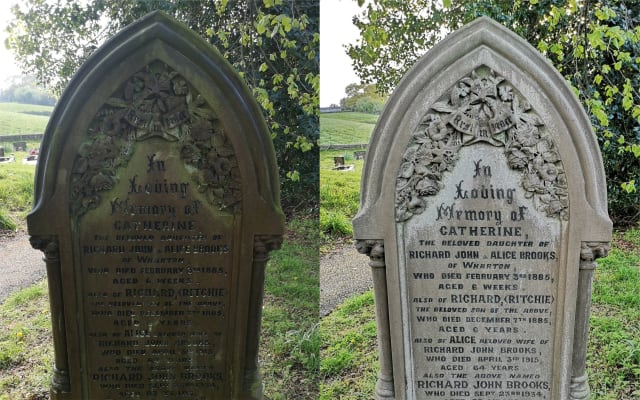 A father and his children are using their daily exercise to clean gravestones in local cemeteries.

Ryan van Emmenis, from Winsford in Cheshire, has cleaned more than 20 headstones with help from his children since lockdown started last month.

It started after a friend posted a picture on social media of his sister’s grave, and Mr van Emmenis, who runs a cleaning company called Cleaning Helps, noticed it had become weathered so offered to go and clean it.

“I thought ‘I can do this more’,” he told the PA news agency. “When I’m out on my walks I pass a couple of churches and there are some really old headstones and tombstones.

“I thought ‘I’ll just take a out a little brush, some cleaning products etc and as I pass when I stop for my little break I’ll have a little drink of my water and do a bit each day’.

“You see results and you’re like ‘oh, this is great’ so I just wanted to keep doing it.”

The length of time each stone takes depends on the size, but on average he spends about an hour on each one over the course of three or four visits.

But he has some help now in the form of his three children – Brooke, 12, Lana, four, and Larsson, three – who have begun to get involved.

“It’s good for the children to learn a little bit of history but also respect their environment,” Mr van Emmenis, 37, said.

“They’re quite good at it to be fair.”

After initially cleaning up a gravestone to help out a friend, Mr van Emmenis started to clean others in two local cemeteries – St Chad’s and Swanlow Park – that were a little older and looked like they could do with freshening up, encouraged by his wife Hayley.

“Some of these headstones I’m cleaning are over 100 years old. And algae, moss etc can have a really negative impact on them so you’ve got to be really careful.”

He has now linked up with the vicar of a local church to decide which stones to work on.

Mr van Emmenis has posted only a couple of pictures on social media but has shared images among his friends and has seen them posted around numerous local Facebook groups, leading to family members getting in touch to thank him for his work.

He said: “I had some feedback from people saying they were really grateful for what I’d done because it was family members and they hadn’t visited the grave for 20 years, they’d been unable too.”

He added: “Someone used the term ‘you’re bringing memories back to people’.

“When a grave is dull and it’s got algae on it and you can’t read it, there’s nobody seems to give it much time if they don’t know the person.

“Once you’ve cleaned up one of these graves, it’s really noticeable, which means people are stopping and taking a moment to read and remember these people.”

As a cleaning professional, Mr van Emmenis has access to products that are not readily available to the general pubic – but for anyone hoping to refresh a family member’s gravestone, he says they can do a good job with soap and water.

“A little bit of patience, care and attention and a soft bristled brush with a bit of soapy water will do a fantastic job,” he said.