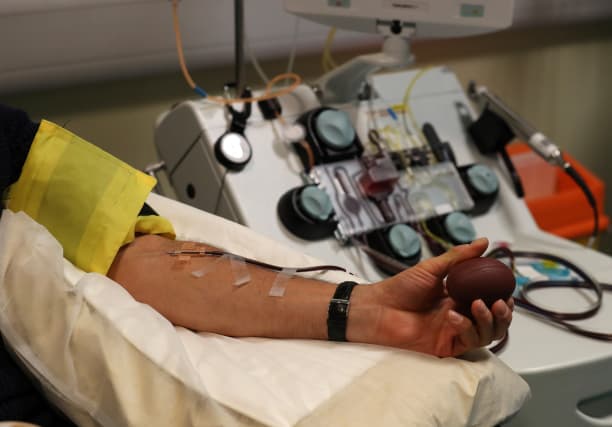 People who have recovered from Covid-19 have begun donating their blood plasma to see if it can help patients currently infected with the virus.

Photos issued by NHS Blood and Transplant (NHSBT) show former patients giving their blood plasma in a process known as plasmapheresis, which uses a machine similar to those used in regular blood platelet donation.

The plasma from former patients is rich in the antibodies that develop as somebody recovers from an illness.

It will be transfused into people who are seriously ill with Covid-19 and struggling to develop their own antibodies.

The number of antibodies rises steadily in the bloodstream of those who have been ill and is thought to peak between 21 and 28 days after recovery.

Donors must have tested positive for the illness either at home or in hospital, but should now be three to four weeks into their recovery, ideally 29 days.

A donation session takes around 45 minutes to give two units of plasma, and can be repeated as regularly as every fortnight.

Previous research has suggested that antibodies drawn from the blood of Covid-19 survivors improves the symptoms of patients severely ill with the disease.

Scientists in China who carried out the preliminary study said no serious adverse reactions were observed after convalescent plasma transfusion.

The new photos released by NHSBT were taken at the Tooting Blood Donor Centre in London over the weekend.

Plasma donations will initially be used in a clinical trial.

However, more plasma is being collected than is needed so that, if the clinical trial is successful, significant quantities can be supplied to hospitals immediately.