Captain Tom is sent 125,000 cards from around the world ahead of 100th birthday 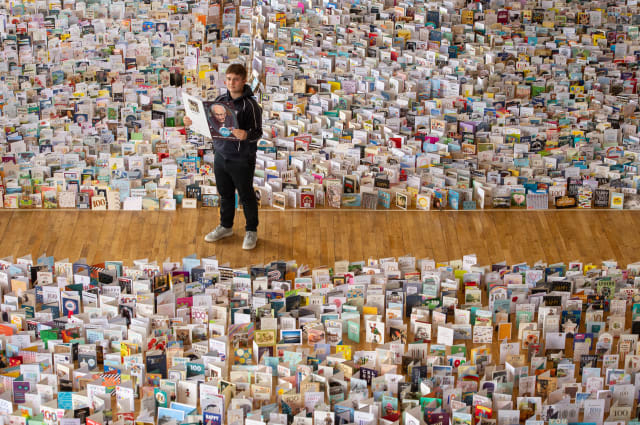 A school in Bedfordshire has been flooded with thousands of cards from well wishers across the globe for Captain Tom Moore's upcoming 100th birthday.

The Second World War veteran, widely known as Captain Tom, has raised more than £29 million for the NHS by walking laps of his garden in Bedfordshire.

He has been praised around the world for his fundraising campaign and many have thanked him in the form of a birthday card.

Ahead of his landmark birthday on Thursday, more than 125,000 cards have been sent to Bedford School where his grandson, Benjie Ingram-Moore, attends.

Hugh Maltby, director of Bedford School Association, said: "Benjie has been such an inspiration in his grandfather's campaign that we wanted to offer a way of giving back.

"When the family told us about all the cards being received at their local post office, I didn't hesitate to offer school's support to help open and display the cards."

Headmaster James Hodgson said: "We are so very proud to see how far Benjie has come with this – the story of his grandfather, Captain Tom Moore, has captured the nation and is a real affirmation of people's kindness.

"We are honoured to offer our Great Hall at Bedford School with our team of volunteers to act as both a makeshift sorting office and a place to display the incredible number of 100th birthday cards."

It has been both heart-warming and humbling to see our school community come together to help Captain Tom with the massive task of opening his tens of thousands of 100th birthday cards. Read the full story in the link: https://t.co/NYgDAIeYnX

"We will come through this all the faster and the United Kingdom will emerge stronger than ever before."

The Royal Mail postmark, which will be applied to all stamped post between April 26 and May 1, reads: "Happy 100th Birthday Captain Thomas Moore NHS fundraising hero 30th April 2020."

The fundraiser's original target of £1,000 was broken in around 24 hours and he extended his challenge to 200 laps after he completed the first 100 two weeks ahead of schedule.