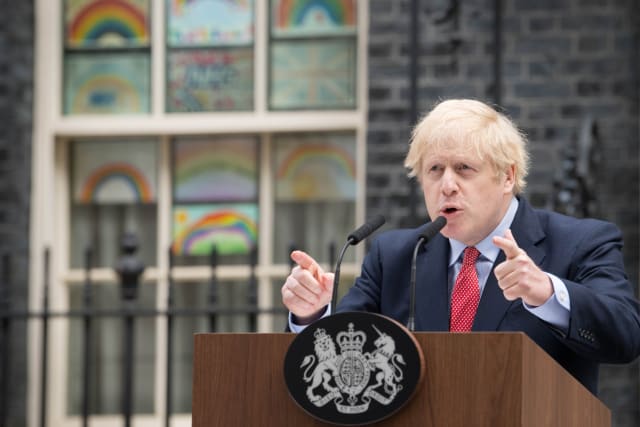 Boris Johnson will lead the nation in tribute to fallen frontline workers who have died in the coronavirus crisis, the day after he returned to Number 10 after beating Covid-19.

The Prime Minister, who spent three nights in intensive care earlier this month, will observe the minute’s silence at 11am on Tuesday. More than 90 NHS and social care workers have died during the pandemic.

Mr Johnson is also reportedly planning to refine lockdown rules in the coming days, amid mounting pressure for the Government to set out the next steps before they must be reviewed on May 7.

Speaking outside Downing Street on Monday morning, the PM insisted he would not risk a second peak in the disease by relaxing restrictions too quickly.

The Times reported that schools will remain shut next month, but shops selling non-essential items will be allowed to reopen if customers can be kept two metres apart. People could also be allowed to mix with a wider group of friends or family, according to the paper.

A total of 21,092 patients have died in hospital after testing positive for coronavirus in the UK as of 5pm on Sunday, up by 360 from 20,732 the day before. However, the true number is likely to be significantly higher when deaths outside hospitals are included.

The latest figures on deaths in care homes and the community will be published by the Office for National Statistics on Tuesday.

– The NHS will restart some vital services, including cancer care, which had been paused due to the coronavirus outbreak, from Tuesday

– Health Secretary Matt Hancock announced a life assurance scheme to pay £60,000 to the families of frontline NHS and social care workers who have died in the course of their duties

– Chancellor Rishi Sunak said small businesses will be able to secure a loan worth up to £50,000 with the Government guaranteeing 100% of the risk in the latest emergency scheme aimed at helping firms survive the crisis

Unison, the Royal College of Midwives and the Royal of College of Nursing launched a campaign last week for the nation to take a moment to honour frontline staff who have died during the Covid-19 crisis.

Between them, the organisations represent more than a million NHS and public service workers including porters, refuse collectors and care staff.

On Monday, the PM’s official spokesman said: “We will be supporting the minute’s silence. We will be asking everybody who works in the Government to take part and we would hope that others will take part nationwide as well.”