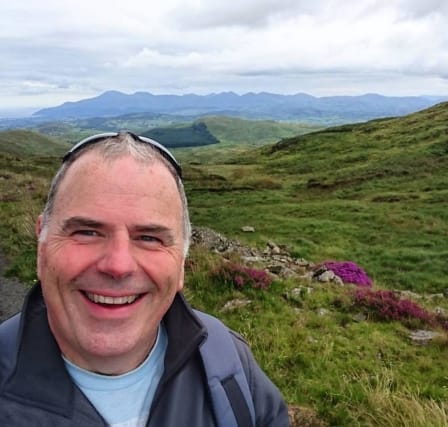 A retired Belfast GP with incurable cancer is walking part of the Camino de Santiago pilgrimage in his driveway this week to raise money for the developing world.

Father-of-five Martin McMullan, 57, is doing the equivalent of the stage from Logrono to Burgos in northern Spain and plans to complete 30 kilometres a day in his garden.

The family doctor is seeking donations for the Trocaire charity.

He said: “Trocaire is a charity that relies on Lenten contributions for the people of the Third World.

“I felt that they were going to get hit hard for contributions since Lent celebrations were all cancelled.”

He recognised the special challenges the coronavirus posed to deprived communities overseas.

“Just affording people the concept of social distancing and hygiene would be very difficult for them.

“Charities like Oxfam and Concern would be working with very basic measures so that was the genesis of it.”

He aims to cover 125 kilometres over five days, turning 58 the day he reaches the equivalent of Burgos.

He will follow a virtual version of the Camino route using step-measuring technology and have breaks after mileages corresponding to real rest stops.

He is ordering his supermarket shop and is limited to 80 items but hopes to squeeze in a few Spanish olives to lend a little authenticity.

Dr McMullan is a veteran of several sections of the Camino and first walked it to raise money for a charity linked to his medical condition.

He was diagnosed with a blood cancer, myeloma, in 2012, when he was just past his 50th birthday.

It normally affects people much older than him and damages the bone marrow.

He is highly vulnerable during the pandemic and on the list to self-isolate from even his own family.

Dr McMullan is living in an annex from the house to shield him from the infection.