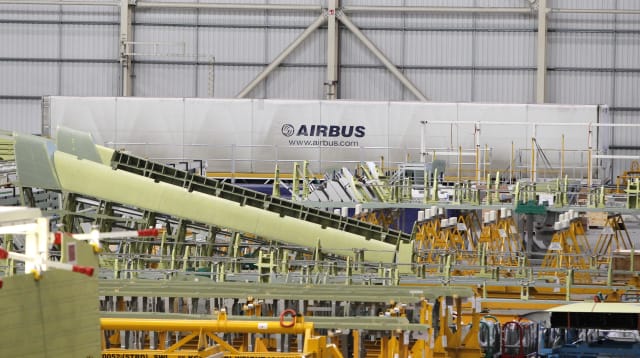 Aerospace giant Airbus is to furlough more than 3,000 staff working at its site in North Wales, the company has announced.

The news comes after chief executive Guillaume Faury warned the company was “bleeding cash at an unprecedented speed”.

Airbus said about half of the staff at its Broughton site would be placed on the UK Government’s job retention scheme, which pays 80% of wages up to £2,500 a month.

It is understood the company will top up salaries by a further 5% to 10%.

The coronavirus pandemic has led to airlines grounding the majority of their fleet.

Earlier this month, Airbus announced a plan to cut its aircraft production rates by around a third.

Airbus employs 13,500 people in the UK, including at Broughton, and Filton in Bristol.

An Airbus spokesman said: “Airbus confirms it has agreed with its social partners to apply the Government’s job retention scheme for approximately 3,200 production and production-support employees at its commercial aircraft site in Broughton.”

Union officials described the announcement as “devastating news” for the workforce.

Peter Hughes, Unite Wales regional secretary, said: “The current crisis in the aviation industry caused by coronavirus is causing concern over the long-term viability of the plant at Broughton.

“The fact that the vast majority of the core workforce are about to be furloughed is very worrying.

“Whilst we of course recognise the enormous challenges facing the industry, it is crucial that Airbus holds its nerve and does everything within its power to get through this crisis fully intact and ready to ramp up production to pre-pandemic levels when the crisis ends.

“Today’s news has to result in urgent and immediate UK Government financial support for the aerospace sector to enable it to get through this intensely difficult period.”

Daz Reynolds, Unite convenor at Broughton, said the workforce was “extremely worried” for the future.

“Today’s news has come as a body-blow to the whole plant. We need to protect the highly-skilled and dedicated workforce at Broughton,” he said.

Earlier, Wales First Minister Mark Drakeford called for support from the UK Government to help manufacturing in the country.

“We will play our part, but we need a solution that addresses the global nature of the problem.”