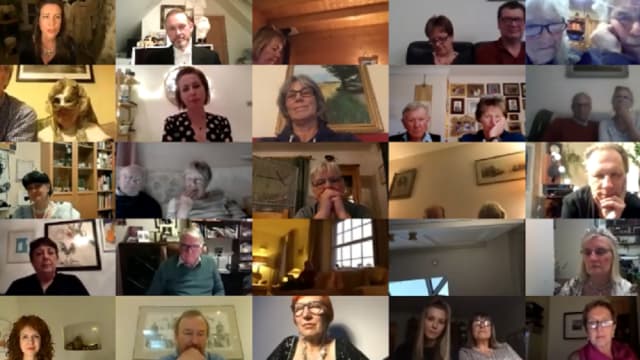 A Salisbury singing festival is bringing its event online for a series of “charming” weekly Zoom sessions.

Opera singer and Celebrate Voice founder Lynsey Docherty set up the online event after being concerned that the singing festival featuring opera, jazz and folk music would not be able to go ahead in October as planned.

“The premise of the festival is that it’s in very intimate spaces, so it was never to set up something that becomes the next Glastonbury, the joy of it is about the intimacy,” Ms Docherty said.

“I could see straight away that this (lockdown) is going to go on for a long time.

The interactive sessions take place every Sunday, and see people dress up and sing along to live performances.

Ms Docherty said: “What the joy is for them is that they know they’re being presented with quality singers so it’s bringing first-class quality singers to their living rooms.”

The online sessions bring in several hundred viewers a week, and have had participants from the United States, France, Finland, Belgium, Portugal, Spain and New Zealand.

Ms Docherty said that viewers in lockdown have thanked her for the sessions and that it “really lifts them”.

“We don’t know what’s going on for people all of the time, some of the more personal emails that I have received are quite moving,” she said.

The sessions, co-hosted with singer Philip Smith, are free, however viewers have been donating to help the musicians taking part who have lost work due to the ongoing coronavirus crisis.

“The first thing was to keep people connected. I’m on my own, a single parent of a four-year-old,” Ms Docherty said.

“Most musicians are pretty social creatures, and to see that our industry has been affected the way it has, all of my colleagues’ projects and performances are just wiped from the diary. You can either get panicked about that or you can adapt.”

Ms Docherty said that the festival will come back to Salisbury after lockdown, but that the Zoom sessions have been “special”.

She said: “I quite like the transient nature of it, maybe that’s what will make it special.

“It’s charming and it’s real. In all of our professions, everything has to be so polished, I think it’s a bit of a relief.”