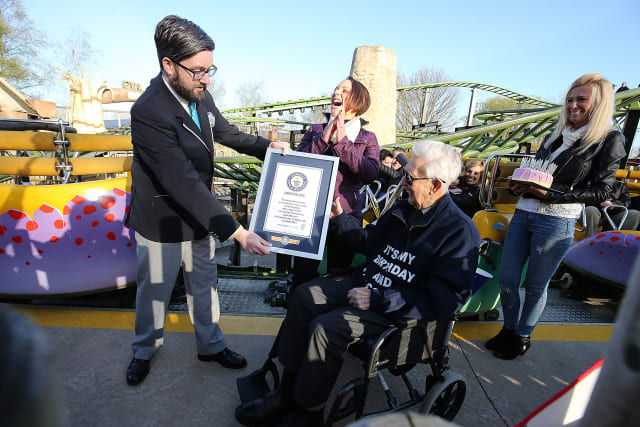 A daredevil pensioner known for his record-breaking feats has died aged 108, his family have said.

Jack Reynolds, from Derbyshire, broke four Guinness World Records for charity to mark his birthdays between the ages of 104 and 107.

Daughter Jayne Goodwin, 59, said her father had planned to release a hit record this year to mark his 108th birthday.

He died on Saturday afternoon, having been unwell following a fall in December last year, she said.

“There will be the massivest gap in my life. There will just be a big void but he’s left his legacy,” she said.

Ms Goodwin said mourners had drunk a tot of whisky in his honour at her father’s bungalow in Hollingwood, Chesterfield.

“The whole street’s just done a tribute to him. There was fireworks and a singer and everything, it was so sweet,” she said.

“The picture here, with all these hundreds of people speaks for itself. He was unbelievable, he was a magnet to people.

“He was just unbelievable, an inspiration. To know him was to love him immediately.”

At the age of 102, he was one of the oldest people to take part in the ice bucket challenge, raising money for research into motor neurone disease – sporting nothing but a pair of Union flag underpants.

His first world record came on his 104th birthday in 2016 when he became the oldest person to get a tattoo.

He broke his latest record last year when he became the oldest person to perform as a supporting artist on a TV show by appearing on the soap Hollyoaks.