Ministers reject calls from Tory donors to lift the lockdown 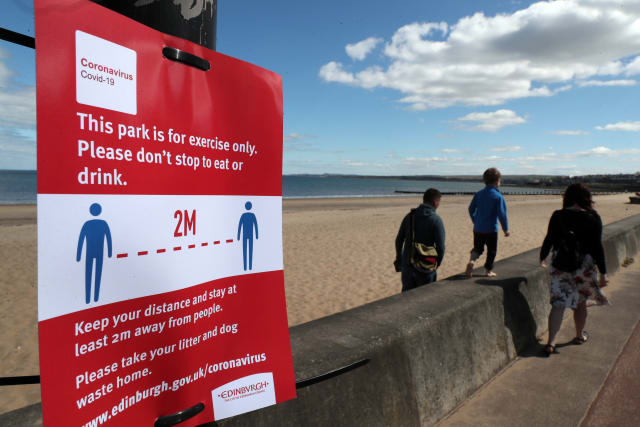 Foreign Secretary Dominic Raab has dismissed renewed calls for an early easing of the coronavirus lockdown, saying the outbreak was still at a “delicate and dangerous” stage.

With Boris Johnson due to return to work in Downing Street on Monday, ministers have come under intense pressure from senior Tories to relax the strict social-distancing measures, amid concern at the damage they are doing to the economy.

But Mr Raab, who has been standing in for the Prime Minister while he recovered from the disease, said the Government would proceed “cautiously” in order to avoid a second peak in the outbreak.

“We are at a delicate and dangerous stage,” he told Sky News’s Sophy Ridge on Sunday programme.

“We need to make sure that the next steps are sure-footed, which is why we are proceeding very cautiously and we are sticking to the scientific advice.”

He was backed by the NHS England medical director Professor Stephen Powis, who said while the number of patients in hospital with the disease was continuing to fall, it could easily pick back up if the restrictions were relaxed.

With some DIY centres starting to re-open and draw in weekend shoppers, Prof Powis expressed concern that the data showed a “slight uptick” in the numbers of people out on the roads.

“My fear is that those curves won’t continue to be on a downward trend, but will start to go on an upward trend. We are not at a point where any of us can be absolutely confident that that’s not going to be the case,” he told the daily No 10 news conference.

“We need to remind ourselves that this has been a really tough four weeks and we don’t want to lose the benefits that have come from this. We need to keep going.”

His warning came at the end of a weekend which saw the coronavirus death toll in hospitals pass the 20,000 mark with fears that many more have died in care homes, hospices or in the community.

According the latest official figures, a total of 20,732 patients had died in hospital after testing positive for coronavirus in the UK as of 5pm on Saturday, up by 413 from the day before.

Mr Johnson returns to No 10 after two weeks convalescing at his official country residence at Chequers. Prior to that he spent a week in St Thomas’ Hospital, including three nights in intensive care.

Even before he was back in London, he was facing calls from a series of wealthy Tory backers who have donated millions of pounds to the party coffers to begin lifting the lockdown to allow the economy to start up again.

Financiers Michael Spencer and Peter Hargreaves, the banker Sir Henry Angest, Phones4u founder John Caudwell and restaurateur Richard Caring all told The Sunday Times they wanted to see some re-opening of the economy.

Steve Morgan, the former boss of the housebuilder Redrow, told the paper: “We’re actually in danger that the medicine – if you want to call the lockdown that – is more harmful than the cure.”

Mr Raab, however, said that while the Government had been doing it’s “homework” in readiness for the time when restrictions could be eased, people would have to get used a “new normal”.

“We won’t just have this binary easing up of measures. We will end up moving to a new normal,” he told BBC1’s The Andrew Marr Show.

“We need to take a sure-footed step forward which protects life but also preserves our way of life. So we are very focused on doing the homework that can allow us to do that.”