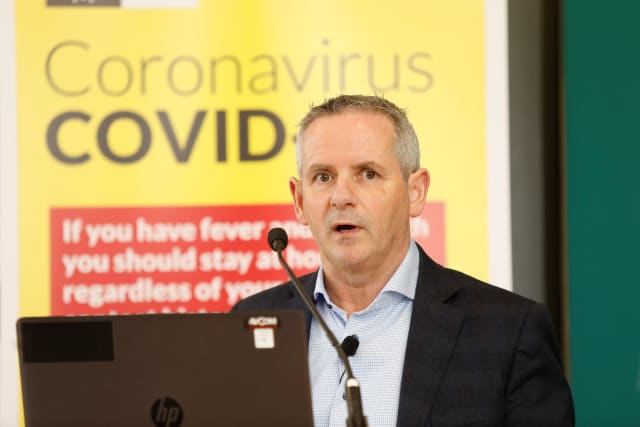 Testing for Covid-19 will be scaled up to 100,000 per week by the middle of next month, Ireland’s health chief said.

Officials are considering the best route for swabs to take to laboratories, use of the ambulance service, and automation of the process when positive results come back and notifications go out for contact tracing.

A shared “road map” on the way forward has been agreed between the health service and Government and is due to be signed off by ministers at a Cabinet meeting next week.

Health Service Executive (HSE) chief executive Paul Reid said: “We are in a much better place.”

He admitted there had been “constructive tensions” with his sponsor, Department of Health, amid concerns about how exactly Ireland would reach its declared target for testing.

A total of 100,000 tests a week are expected to be reached by the third week in May, Mr Reid said, following agreement with the department on the road map and alignment of case definitions.

The HSE is also increasing capacity at laboratories and sealing commercial agreements with German providers.

The change is part of what the chief executive described as moving from a “war time” footing in response to a virus which has forced the shutdown of most of the economy.

Movement restrictions to within two kilometres of home to limit coronavirus’ spread have been imposed.

Fears remain about clusters of infection in some nursing homes.

A total of 75 homes require intensive support, a HSE official said on Sunday.

Mr Reid said: “We need a new model that supports the country in the future in terms of pandemics.”

That included new “sustainable” processes for contact tracing cases of the virus and better procurement of protective equipment.

He said the Republic was building an indigenous supply of PPE.

The chief executive said there was an opportunity to stimulate the economy over the next couple of years instead of ordering from China.

“Much of the firefighting approach we have had to put in place now, we need a much more strategic approach,” he said, adding: “We need to look forward in a very different way.”

He warned: “I am talking about this year and the following year because Covid-19 is going to be with us.”

He said Ireland could not go back to traditional models and practices of care and needed to break down bureaucracy, adding: “This is a new vision, a new future, this is a new lens we are going to look through in the future.”

Dr Holohan has said he is not yet in a position to recommend that lockdown restrictions be eased.

Mr Reid said systems in response to the pandemic which had been established for three to six months would now be needed for a much longer period – perhaps into next year.

“We need to build for the longer model, not just a wartime response to Covid-19, to protect everybody.”

He said the executive would need to scale up and down the response as necessary depending on how the disease progresses.