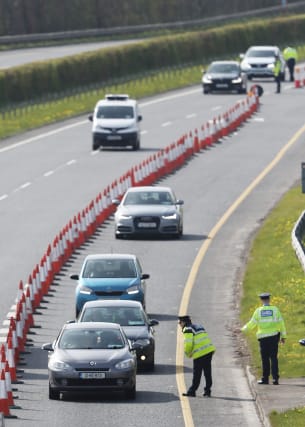 An Irish border community is “angry and frustrated” that social distancing laws cannot be enforced on day trippers from Northern Ireland, a public representative said.

Donegal’s stunning sandy beaches and Atlantic coastline are normally a magnet for visitors.

The north westerly county is urging its neighbours to stay away as residents observe a country-wide two kilometre movement restriction to limit spread of the coronavirus.

A loophole in the law means travel curbs do not apply to those living outside the Republic’s legal jurisdiction.

Councillor Jack Murray, from the Inishowen area, said: “I have been inundated with people who are angry.

“There is great annoyance and frustration when people are sacrificing so much and there is a loophole in the legislation so it does not apply to people in the Six Counties.

“It was poorly-written legislation.

“We need to take an island-wide approach to this, regardless of the loophole, and adhere.”

Irish police in border counties have been told those on day trips from Northern Ireland can no longer be arrested if they breach the law.

Mr Murray added: “The virus does not respect the border and tackling it should recognise that.

“We should not have different approaches, we need to look at this in a holistic way.”

It is only a short distance from Derry in Northern Ireland and for generations has been seen as part of the city’s natural hinterland.

Mr Mac Lochlainn said: “The vast majority of our people have been adhering to the movement restrictions, North and South, but the emergency laws were for the very small minority who won’t.

“This error is unacceptable, considering that all government legislation goes through the attorney general’s office.”

In supporting the Covid-19 public health guidelines, Irish police said they adopted a “graduated” response based on a tradition of policing by consent.

The Garda said: “This has seen gardai (officers) engage, educate, encourage and, as a last resort, enforce.

“An Garda Siochana continues to adopt this approach and urges everyone resident or visiting this State in the first instance to adhere to the public health guidelines to protect themselves and others from Covid-19.”

Gardai have used a wide range of laws available as part of the operation imposing restrictions, including those surrounding  public order, assault, road traffic and drugs.

The statement added: “It remains the case that anyone visiting the State even temporarily is amenable to such criminal laws of this State during their time here.

“An Garda Síochana does not comment on legal advice it receives on specific issues nor on consultation with Government departments on relevant legislation.

“The detail of a particular piece of legislation is a matter for the relevant department.”

Stormont health minister Robin Swann has repeatedly warned against complacency in the fight to control the virus.

Its spread has been driven down in recent days by a bar on non-essential travel, and police have issued hundreds of fines for non-compliance.

Mr Swann told the BBC he was concerned people were becoming more lax over the lockdown rules and were “starting to ease up on their responsibility”.

Cemeteries reopened to the public over the weekend following mounting pressure on politicians, while rules on driving for exercise were adjusted to allow reasonable travel.

Contact tracing of cases of infection is being rolled out across Northern Ireland next week.

The number of tests conducted is also being ramped up.