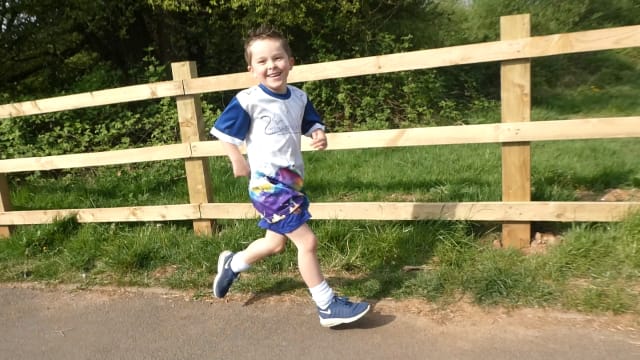 More than £4.6 million has been raised for UK charities by people completing various challenges in lieu of the London Marathon.

The 40th edition of the sporting event was replaced by the 2.6 Challenge on Sunday after it was postponed due to the coronavirus pandemic.

Race organisers launched the campaign to help the charity sector which is facing a £4 billion shortfall, according to the National Council for Voluntary Organisations.

The event – which took place on the day the marathon was due to be held – has seen thousands of people take part in various gruelling, fun and unusual challenges based around the numbers 2.6 or 26.

Fry had previously posted a video on social media of him attempting to use a cricket bat to hit a ball up in the air 26 times in a row.

He said he would auction the bat, which is signed by members of the England cricket team, in support of the Ruth Strauss Foundation.

Meanwhile, five-year-old Henry Edwards, from the village of Miskin in South Wales, ran 26 miles across 10 days, raising more than £9,500 for the bereavement charity 2 Wish Upon A Star.

His mother, Katey, 39, who completed the challenge with him, told the PA news agency: “I always knew Henry was a good walker, but I never realised he could run the distance so well.

“We started every day at 10am and everyone from the village has come out clapping and cheering from their doorsteps.

“Today was the closest you could get to running the London Marathon without running it, in terms of atmosphere.”

Charity worker Sophie Allen, from Romford in London, took part in one of the more unusual challenges of the day, by swimming 2.6km in a 2×3 metre pool in her garden.

The 38-year-old, who has raised more than £450 for London’s Air Ambulance, said it took her one hour and 10 minutes to complete.

She said: “It was long, but good. I think it took me about an hour longer than it takes to swim in a normal pool.”

Hugh Brasher, event director of London Marathon Events, said: “The response we have had to the 2.6 Challenge today has been incredible.

“It has been so inspiring to see the nation come together – from superstar celebrities to young children – to help save the UK’s charities.

It’s important to say that today was just the start of the campaign and we want to encourage people that haven’t already taken part to think of a challenge and give it a go.”