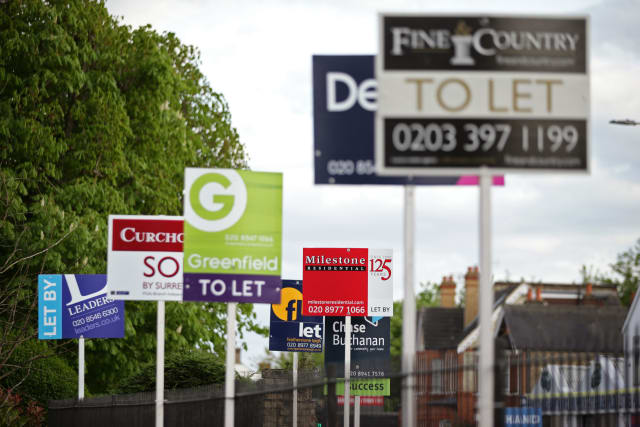 Seven in 10 renters whose tenancies were up for renewal stayed put in March, the highest proportion for that time of year since 2008, according to an index.

Some 70% of private sector tenants whose agreements were up for review renewed their tenancies rather than quitting, marking the highest proportion for the month of March since 77% in March 2008, Hamptons International said.

The index also found that across Britain, average rents on renewed tenancies fell by 0.5% year-on-year in March to £928 per month – marking the biggest fall since this measure started in February 2014.

The fall was driven by London and surrounding regions in southern England, as concerns about jobs and earnings increased.

The Government has said home buyers and renters should, where possible, delay moving to a new house while lockdown measures are in place to limit the spread of coronavirus.

Property website Rightmove reported last week that it has seen a spike in people searching for rental homes with gardens on its website.

While physical property viewings cannot generally take place currently, many agents are offering online videos of properties they are marketing for sale or rent.

Aneisha Beveridge, head of research at Hamptons International, said: “The first signs of the Covid-19 effect on the rental market are starting to show. With lockdown restrictions introduced towards the end of March, 70% of tenants chose to stay put and renew their tenancy instead of moving – the highest level since 2008.

“Rents on renewed tenancies fell 0.5% in March, marking the biggest fall since the index began in February 2014.

“Tenants’ concerns about their future income prospects, combined with greater risk of void periods for landlords willing to advertise their property on the open market, resulted in the rent falls. London, where tenants’ incomes are more stretched, recorded the biggest fall in rents.

“Once lockdown restrictions ease, we expect activity levels to rise. Renting offers more flexibility than buying a home, so as uncertainty rises, so too does the demand for rental homes.

“But although demand for rental accommodation is set to increase, and there are already signs of it picking back up again, the longer-term economic damage to people’s jobs and incomes means that rents on newly let properties are likely to fall between 2% and 5% this year.”

Here are the average monthly rents for renewed tenancies in March, according to Hamptons International, with the annual percentage change: