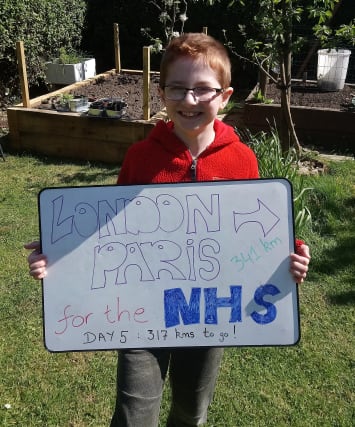 A nine-year-old boy inspired by Captain Tom Moore’s fundraising efforts will be running from London to Paris in his garden.

Josh Hall, from Blean, Kent, is running 341km (around 211 miles) over the course of two months to raise money for the NHS.

“After my parents told me about Tom, I couldn’t wait to do something crazy myself; I thought about doing a little jog to Paris,” he wrote on his JustGiving page.

Rebecca Hall, Josh’s mother, told the PA news agency: “It was really inspired by Captain Tom Moore, he was going on every day and looking at his JustGiving page and saying ‘mummy, he’s doing such a good job raising all this money’.

“He’s a little boy who loves challenges… he’s very into geography so he was choosing distances and eventually landed on Paris, aiming to run to the Eiffel Tower during lockdown.”

Josh started the challenge on April 16, and will be running 6km (3.7 miles) per day over three 2km (1.2 mile) sessions in the garden and local green areas.

He will be using a rowing machine to cover the distance that would be the Channel and the Seine river.

Josh and his mother have decided to bring his love of music to the challenge, with the nine-year-old planning to play a song on his double-bass once the distance is covered.

Donations to NHS Charities Together can be made at www.justgiving.com/fundraising/josh9