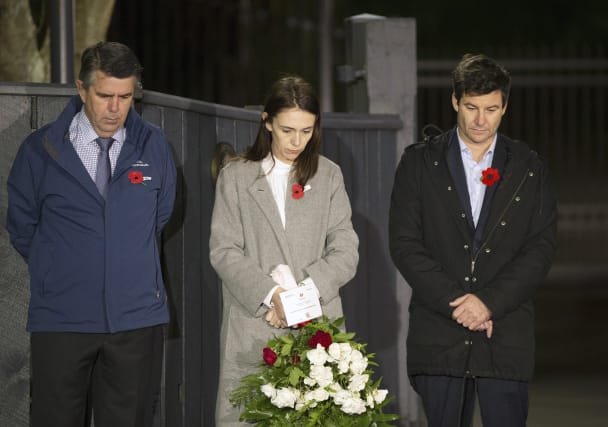 Australians and New Zealanders marked Anzac Day from outside their homes as memorial ceremonies and marches were hit by the pandemic.

The annual day of remembrance for the countries’ war dead is traditionally the year’s largest trans-Tasman event but the ongoing crisis meant large gatherings were not possible.

New Zealand Prime Minister Jacinda Ardern kicked off proceedings with an Instagram post showing a wreath outside her residence in Wellington, as well as her and fiance Clarke Gayford standing with her father, Ross Ardern.

Ms Ardern wrote: “On my street one of our neighbours played the service through a small speaker while we all stood apart but together… A different, but still a really special Anzac Day. Lest we forget.”

Her Australian counterpart Scott Morrison kept things brief, simply tweeting a photograph of himself with wife Jenny at the Australian War Memorial (AWM) in Canberra with the caption “Lest We Forget”.

Mr Morrison earlier delivered the commemorative address at the AWM, with the memorial’s Twitter account encouraging people to upload photos of themselves outside their homes for the traditional dawn service.

Sharissa Iuli from the northern state of Queensland responded to the call by posting a photo of her holding candles with her sons Genesis and Gabriel outside their Brisbane home.

Mrs Iuli also posted the Ode of Remembrance from Laurence Binyon’s poem For the Fallen, first published in The Times in 1914, in English and Maori.

Lisa Roper posted a photo from her street in nearby Ipswich, with neighbours shown standing respectfully by candelight.

Anitra Wells photographed her sleepy sons in matching flannelette pyjamas outside their Melbourne home during what she described as “one of the most moving experiences”.

And at South Australia’s Black Point, Susie Reynolds captured the day breaking across the Yorke Peninsula and encouraged others to “Light up the dawn”.

Anzac Day – April 25 – commemorates the anniversary of the start of the First World War Gallipoli landings, and is a national day of remembrance for Australia and New Zealand.

Waves of Allied forces launched an amphibious attack on the strategically important Turkish peninsula, which was key to controlling the Dardanelles straits, the crucial route to the Black Sea and Russia.

But the plan backed by Winston Churchill, then first lord of the admiralty, was flawed and the campaign, which faced a heroic defence by the Turks, led to a stalemate and withdrawal eight months later.

Its legacy is the celebration of the “Anzac spirit” – courage, endurance, initiative, discipline and mateship – shown by the Antipodean troops.