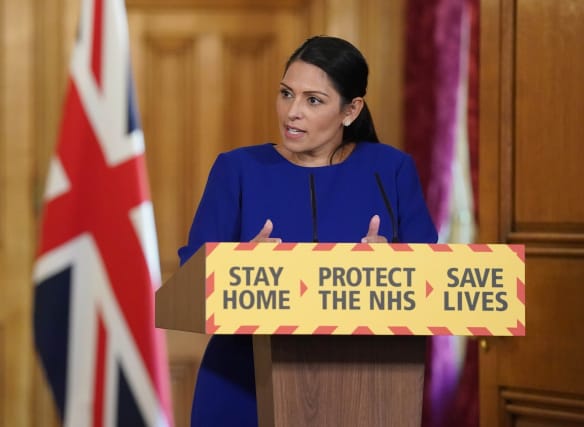 The Government is reviewing visa surcharges for healthcare workers who have come to the UK and are fighting the coronavirus pandemic, the Home Secretary said.

Priti Patel told the Downing Street press briefing on Saturday that the immigration healthcare surcharge was one of several measures being looked at by the Government.

Workers coming to the UK from outside the European Economic Area are required to pay the fee in order to be able to use the NHS.

But asked by a journalist if it was time to “scrap” the charge for doctors and nurses who are now working during the Covid-19 crisis, Ms Patel said the measure was “under review”.

She said: “You’ll be aware of many changes we have already made around the immigration status and the visa status for NHS workers for extending their visas already if they were coming up for expiry.

“We have a range of measures that are, like most things in Government, under review, and we are looking at everything including visa surcharge.”

Ms Patel said she, along with Health Secretary Matt Hancock, were looking at “everything we can do” to support frontline NHS workers.

The surcharge costs £300 per year for student visas and £400 per year for all other visa and immigration applications, according to the Government’s website.

Those exempt from paying the fee include people who are applying to stay in the UK indefinitely and diplomats.

Some changes to the immigration rules have already been announced by the Government.

A visa allowing doctors, nurses and health professionals from overseas to work in the NHS was introduced last month after a new points-based immigration system was also announced, with points awarded for specific skills and professions.

In March, the Home Office also pledged to extend visas for the migrant NHS frontline workers and their relatives which are due to expire before October 1.

Anticipated to apply to around 2,800 staff, the visas would be renewed automatically for a year free of charge so they can remain in the country.

But on Tuesday, lawyers and campaigners told members of the Commons Home Affairs Committee they feared the decision did not have any legal backing which would protect the rights of workers from any future policy change.

Adrian Berry, chairman of the Immigration Law Practitioners’ Association, said a form of legislation known as a statutory incident could be applied to “give everyone legal certainty”.

But the Home Office later insisted the extension applied to all migrant doctors, nurses and paramedics in question and NHS trusts were checking staff visa records to identify who would qualify.