Covid-19 deaths pass 20,000 as Boris Johnson set to return to work on Monday 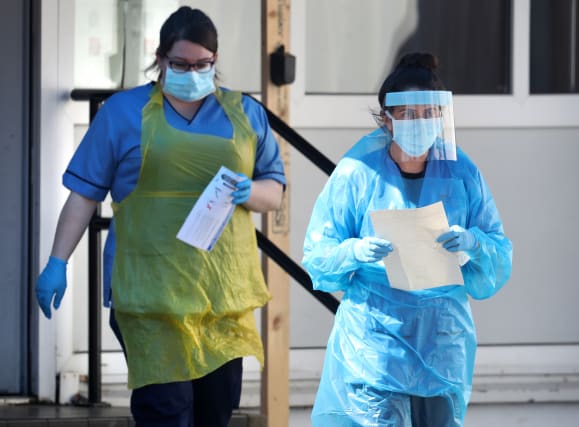 Ministers have warned it is still too soon to start lifting the lockdown as the number of people in the UK who have died in hospital after testing positive for coronvirus passed 20,000.

At the daily No 10 press conference, Home Secretary Priti Patel said the entire nation was grieving as it marked another “tragic and terrible milestone” in the outbreak.

It came less than six weeks after the Government’s chief scientific adviser Sir Patrick Vallance said it would be a “good outcome” if the number of deaths in the UK could be held below 20,000.

One expert suggested the numbers could now double that tally before the outbreak was brought under control in Britain.

It came as it was confirmed that Boris Johnson will return to work in Downing Street on Monday after recovering from the virus.

The Prime Minister has been recuperating at his official country residence at Chequers since being discharged from St Thomas’ Hospital in London.

Professor Stephen Powis, the medical director of NHS England who had echoed Sir Patrick’s original claim, insisted the social distancing measures the Government had put in place were having an effect.

However, he emphasised the difficulties in dealing with a new virus which had created a “once-in-a-century global health crisis”.

“This was going to be a huge challenge not just for the UK, but for every country,” he said.

“Even in countries that have got on top of this early on, we are unfortunately beginning to see new infections.

“So I think the first thing to emphasise is that this unfortunately is not going to be something we will begin to get over in the next few weeks.

“This is something we are going to have to continue working our way through over the months ahead – as I have said before this is not a sprint, this will be a marathon.”

According to the latest official figures, a total of 20,319 patients had died in hospital after testing positive for Covid-19 in the UK as of 5pm on Friday – up by 813 from the previous day.

It meant the UK has become the fifth country to pass 20,000 coronavirus deaths, behind the US, Italy, Spain and France.

That figure does not include deaths in the wider community, such as in care homes, which means the true toll will be higher by several thousand at least.

Dr Paul Hunter, professor of medicine at the University of East Anglia, said the true figure could already be double that amount.

“The World Health Organisation said yesterday that about half of all deaths in Europe are occurring in residence of elderly care homes,” he said.

“We know for a fact the figures reported every day are an underestimate, possibly a significant underestimate of the total number of deaths.”

The UK is well on track to hit 30,000 deaths in hospital, perhaps even 40,000 before the pandemic is brought under control, he said.

“We are undoubtedly going to have one of the highest death rates in Europe,” Dr Hunter added.

The latest figures are likely to lead to renewed questions as to whether Boris Johnson was too slow to order the lockdown – allowing sporting fixtures like the Cheltenham horse racing festival and the Liverpool vs Atletico Madrid match to go ahead.

At the same time, ministers are coming under increasing pressure from senior Conservatives to explain how they intend to start easing the restrictions amid growing dismay at the economic damage the lockdown is causing.

With the Prime Minister expected to return to Downing Street after recuperating from the virus, former chancellor Philip Hammond said he hoped his reappearance would mark a “step change” in the Government’s approach.

“The reality is that we have to start reopening the economy. But we have to do it living with Covid,” he told the BBC Radio 4 Today programme.

“We can’t wait until a vaccine is developed, produced in sufficient quantity and rolled out across the population. The economy won’t survive that long.”

Ms Patel acknowledged the sense of public frustration after five weeks staying at home, but said it was still too soon to begin easing up.

“We know that people are frustrated but we are not out of danger yet, it is imperative that people continue to follow the rules designed to protect their families, their friends and their loved ones,” she said.

“This will continue to save lives.”

However, she said that the regulations did allow people to go to work if they could maintain social distancing and were unable to work from home.

After Prof Powis expressed concern that the number of motor journeys people were making was beginning to rise, she said the police had “enforcement” powers if the rules were ignored.