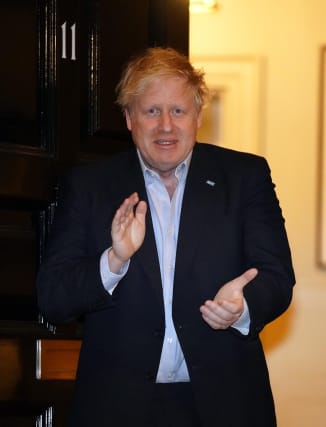 Boris Johnson is set to return to work on Monday, but in the three weeks the Prime MInister has been away the battle against coronavirus has greatly changed.

The PM first said he tested positive on March 27 before entering his mandatory period of self-isolation at home.

Due to his symptoms persisting, Mr Johnson was taken to a London NHS hospital on April 5. Just hours later, he was admitted to intensive care.

He spent two nights in the intensive care unit at St Thomas’ Hospital before finally being released from hospital on April 12 to continue his recovery at home.

Here are the challenges the “raring to go” PM now faces.

The UK death toll in hospitals rose past 20,000 on Saturday, a bleak milestone as health officials had previously hoped that in the best case scenario they could limit this figure to 20,000 or below.

When Mr Johnson went into hospital on April 5, the number of deaths stood at 4,934.

There is no end in sight for lifting lockdown measures. Despite originally setting a review date of April 13, Foreign Secretary Dominic Raab said on April 16 that the shutdown would be extended for at least three more weeks.

The situation will be reviewed again on May 7.

At the Downing Street briefing on Saturday, Home Secretary Priti Patel refused to comment on what the Government’s exit strategy was, saying it would be “irresponsible” to get people’s hopes up.

The problem of adequate levels of PPE is a headache the Government has made little progress on in Mr Johnson’s absence.

According to a study published by the Royal Pharmaceutical Society on Wednesday, over a third of frontline workers surveyed said they were still unable to access continuous supplies of PPE.

A promised shipment of 400,000 medical gowns due to arrive earlier this week turned out to be closer to 32,000, according to media reports.

And many UK business claiming to be able to adapt manufacturing to supply PPE complain they have been ignored by the Government when they approached offered their services.

Health Secretary Matt Hancock previously set a target of 100,000 Covid-19 tests being conducted every day by the end of the month, but with just five days to go that ambition looks doomed.

The Home Secretary said on Saturday that 28,760 tests had been carried out on Friday.

If the Prime Minister hoped a new online booking service set up in his absence would be the answer, it is also facing some serious teething problems.

Home testing kits were listed as “unavailable” on the site just 15 minutes after it reopened on Saturday morning, the BBC said, and it was also not possible to book tests at drive-through regional sites in England and Northern Ireland by 10am.

A spokesman for the Department of Health and Social Care said more tests kits and tesing slots will be made available from Sunday morning at 8am.

The Government insists that the lockdown must continue, but Britons have been tempted back outside to green spaces by days of constant sunshine.

Before he was taken to hospital, Mr Johnson was trying to ram home the “Stay home, protect the NHS, save lives” message, but discipline has been slipping.

Many police forces across the UK have complained of having to deal with flagrant breaches of the shutdown rules, while traffic data revealed car journeys had crept up by three percentage points this week.

And mobility data released by Apple revealed that in recent days searches for maps for walking or driving hadincreased by eight percentage points.

'Get off the grass!' Australian PM and reporters told to move on by angry homeowner