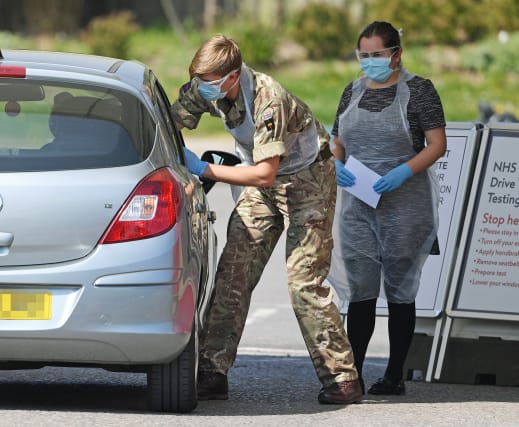 The military is to begin operating mobile coronavirus testing units which will travel to care homes, police stations and prisons across the UK.

The new units will test essential workers and vulnerable people in areas where there is “significant” demand, the Department for Health and Social Care (DHSC) said.

The mobile facilities can be set up in less than 20 minutes and allow for hundreds of people to be tested each day.

Specially-trained members of the armed forces will collect swabs at the mobile sites before they are sent to “mega-labs” for processing, with results available within 48 hours, the DHSC said.

It comes as the Government seeks to hit its 100,000-a-day testing target by next Thursday.

As of Sunday, there are eight mobile units carrying out tests across the country, in areas including Salisbury, Southport and Teesside.

However, the DHSC said “at least” 96 will be ready to be deployed by the start of May.

It follows on from a pilot scheme carried out last week, which saw DHSC vehicles refitted to become testing facilities, based on a design by British Army Royal Engineers.

The armed forces will staff 92 of the units, while civilian contractors will operate a further four located in Northern Ireland, the DHSC said.

The mobile sites will also be used to travel to frontline workers in the fire and rescue service and at benefits centres.

Defence Secretary Ben Wallace said: “Our armed forces will help deliver testing to where it’s most needed, using a network of up to 96 mobile units that will be rolled out in the coming weeks.

“They will make sure our care sector get the testing required to remain in the front line of the fight against this pandemic.”

“In a matter of weeks, we have worked with Britain’s leading scientists, academics and industry partners to build scores of new testing facilities and Britain’s largest network of diagnostic labs in history.”

More than 10 million key workers and their households are now eligible for Covid-19 tests, which can now be booked online through the Government’s website.