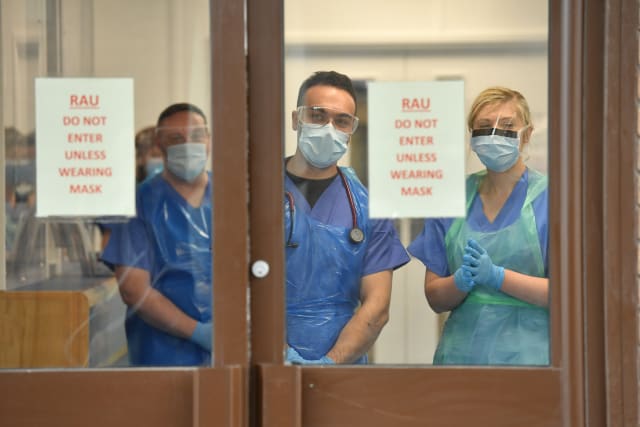 One in four GPs has seen Covid-19 patients face to face without adequate protective equipment, a survey has found.

More than half (52%) of doctors in general practice reported feeling unsafe at work due to a lack of personal protective equipment (PPE), while only a third (33%) said they had received an adequate supply of face masks.

The Government has come under mounting criticism over its ability to ensure frontline staff treating coronavirus patients have the protection they need.

More than 80 NHS workers are now confirmed to have died during the pandemic.

A survey of 675 GPs by Pulse magazine, the publication for GPs, found that around one in four (26%) respondents reported seeing patients with Covid-19 while not wearing any protective equipment.

GPs reported difficulty accessing PPE, with only 13% saying they have received adequate eye protectors, while 12% said they have been provided with gowns.

Three-quarters (74%) of GPs said they fear for their health and/or life.

Meanwhile, 61% of respondents to the survey, carried out between April 17 and 21, said they are adopting a “no PPE, no see” policy at work.

The magazine said a number of GPs had reported seeing asymptomatic patients who were later found to be Covid-19 positive.

One in five reported that they had the disease – either confirmed or suspected – and more than a quarter said they have self-isolated, increasing pressure on the workforce.

Ministers have insisted they are pursuing “every possible option” to secure additional kit, but, with unprecedented worldwide demand, the situation is “very challenging”.

Two RAF aircraft carrying 400,000 medical gowns, but also masks and gloves, arrived in the UK from Turkey on Thursday.

A Department of Health and Social Care spokesman said a further order of 140,000 gowns would be arriving in the UK from Burma in “the coming weeks”.