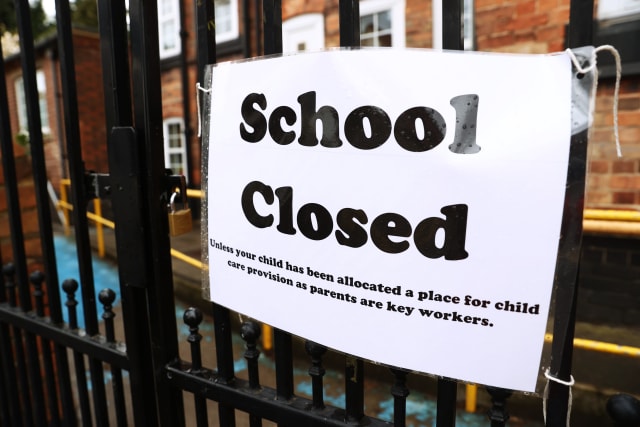 Vulnerable children are being hidden from sight during the coronavirus lockdown, the Children’s Commissioner has warned.

Measures implemented to curb the spread of Covid-19 mean youngsters have been cut off from sources of support, such as teachers and health visitors, according to Anne Longfield.

Data published by the Children’s Commissioner for England on Saturday aims to show the true number of children at risk in every local authority during the coronavirus emergency.

Local area profiles will also highlight vulnerable groups – such as those in overcrowded or inadequate accommodation, young carers or those without internet access.

Ms Longfield welcomed the decision to keep schools open for the most vulnerable, but said more needs to be done to safeguard youngsters who are not attending.

It comes after official figures showed only a small percentage of vulnerable children in England are attending schools which have been kept open for them.

Data published by the Office of the Children’s Commissioner (OCC) is being used to inform a Government dashboard monitoring the safety and care of children and young people during the crisis.

Although most of the figures have been published nationally, it is the first time vulnerability amongst children has been broken down by local authority.

“The coronavirus emergency has put hundreds of thousands of vulnerable children in England at heightened risk,” Ms Longfield said.

“While the Government’s decision to keep schools open for the most vulnerable children is welcome, sadly most of them are just not showing up.

“They are most likely at home, often exposed to a cocktail of secondary risks – a lack of food in the house, sofa-surfing or cramped living conditions, neglect, or experiencing acute difficulties due to parental domestic violence, substance abuse and mental health problems.”

Ms Longfield is asking for real-time data from police, the NHS and Government departments to be provided to local services, so they know which families may not be coping and in need of help.

Analysis by the OCC identifies a number of vulnerabilities, such as children at risk of homelessness, those with parents with mental ill-health and young people involved in criminal exploitation.

For those who are known to social services, the OCC says there is a risk that many more could become “invisible” by being assessed as lower risk by social workers and so deemed not in need of home visits.

“Our figures on local need lay bare the extent and nature of child vulnerability in each area, and the extraordinary pressures on some councils to try and protect them all,” Ms Longfield said.

“I believe that with the right will, government – local and national – could ensure that all vulnerable children are seen and contact is maintained, harnessing if necessary the efforts of suitable volunteers, those from services which are currently closed or who are recently retired from child-facing work.

“It is essential that children who need help are identified and given the help they need.”

The National Education Union welcomed the OCC data and said local authority coordination is “really important” – but added that children are not “hidden” from schools.

“The Covid-19 crisis weighs heavily on teachers’ minds, causing sleepless nights, anxiety and ongoing worry – they know going to school is such a vital part of life for children in usual times.”

Mr Courtney added that expecting all vulnerable children to attend on-site “isn’t realistic or necessarily the safest option”, as some are not attending due to a lack of transport, self-isolating or shielding family members.

Councillor Judith Blake, chair of the Local Government Association’s Children and Young People Board, said: “Understandably, many families are concerned for the health of their children and other family members if they attend school.

“Councils are working with schools and families to provide reassurance, and to make sure that where children aren’t in school, they are still being spoken with regularly.”

Schools, colleges and nurseries across the UK closed their doors to the majority of pupils, apart from the children of key workers and vulnerable youngsters, from Monday March 23.

This represents around 5% of all children with a social worker or an education, health and care plan in England, according to the Government’s analysis.

In response to the OCC analysis, a DfE spokeswoman said: “Schools and early years settings remain open for vulnerable children, who are encouraged to attend where it is appropriate for them to do so.

“We thank social workers and everyone involved in keeping these children safe at this time for their hard work, including continuing to conduct risk assessments and home visits where needed.

“Local authorities are receiving additional funding of £3.2 billion to cope with pressures, including in children’s social care and we have set up new teams working around the country to improve the information we hold about the risks facing these children.”