Uplifting news: A virtual pub and a protective pig mask 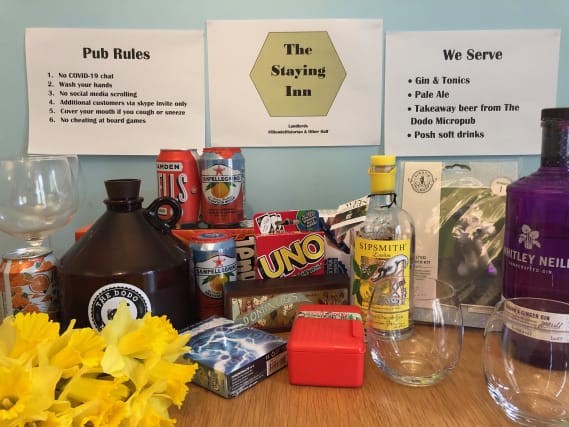 A virtual pub that showcases the skills of the disabled community has opened, while a grandmother donned a protective pig mask to speak to her best friend.

Here’s a look at some of Friday’s more uplifting stories which you might have missed.

A visually-impaired activist has opened a virtual pub which showcases the skills and talents of the disabled community.

Dr Amy Kavanagh, 30, from west London, initially opened The Staying Inn to her friends, telling the PA news agency: “I knew a lot of my disabled friends would be stuck indoors for a long time.”

Originally the virtual pub comprised of a sign, some glasses and board games to amuse Dr Kavanagh’s friends on video calls, but is now open to the public – with pub-goers encouraged to donate the cost of a pint to help make it as accessible as possible.

Dr Kavanagh said she has plans for a deaf social club as well as an accessible technology class, while she hopes that a Paralympian panel might come to fruition, with Dame Tanni Grey-Thompson a regular at the virtual tavern.

An 80-year-old woman won fans on social media after she put on a pig mask so she was able to talk to her best friend.

Marlene Conrad, from Alrewas in Staffordshire, lives in a house with a garden that adjoins that of her friend Maureen Madden.

Ms Conrad wanted to stay protected so the two could see each other during isolation as well as provide some entertainment, so picked up an old fancy dress pig mask to go over and drop off some food over the fence.

Ms Madden managed to grab a picture and sent it to Mrs Conrad’s granddaughter with the caption: “Your Nan’s had a facelift.”

An eight-year-old has written an eBook about Captain Tom Moore after being inspired by the veteran’s fundraising efforts.

Reegan Davies, from Port Talbot, Wales, began writing The Story Of Captain Tom after encouraging other children to send cards for his 100th birthday via the #MakeACardForTom campaign on Twitter.

Having raised more than £1,500 for the Second World War veteran’s campaign, which saw him complete 100 laps of his garden for the NHS, Reegan’s eBook profits will also be donated.

“The story is, from her eyes, how she sees Captain Tom and what’s happened,” Lisa Davies, Reegan’s mother, told the PA news agency.

Two Vietnamese children have donated 20,000 medical masks to the UK.

The masks were sent to the UK successfully by the British Embassy in Hanoi last week on a commercial flight which repatriated 100 British nationals.