Timeline: How Britain headed towards a month under coronavirus lockdown 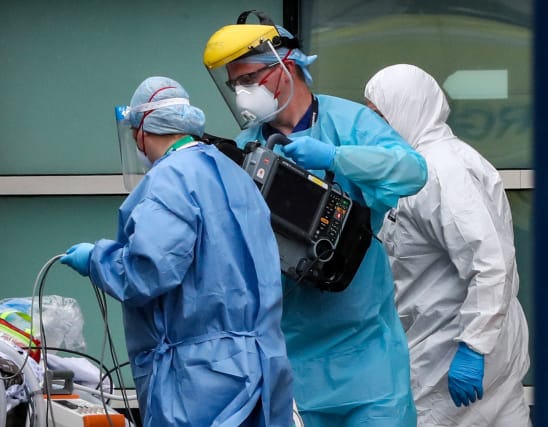 The UK has spent one month under lockdown as its fight to control the spread of coronavirus goes on.

Here are the key dates that track the growing impact of the Covid-19 pandemic:

November 2019 – The first case of coronavirus is identified in the city of Wuhan in the province of Hubei, China.

It is believed the disease may have stemmed from a "wet" market, where living wild animals are sold for meat.

January 21 – Coronavirus starts to appear on the UK news agenda as the number of infections grow in China.

January 25 – The British authorities begin to get nervous about the threat, and health officials team up with Border Force agents to track down 2,000 people who have recently flown to the UK from Hubei province.

January 29 – Britons returning from Wuhan are told they will be put in quarantine for 14 days.

January 30 – The outbreak is declared an international public health emergency by the World Health Organisation (WHO).

January 31 – Two members of the same family test positive for coronavirus in England and are treated at the Newcastle upon Tyne Hospitals NHS Foundation Trust.

More than 80 Britons are evacuated from Wuhan by the Foreign and Commonwealth Office (FCO) and are placed in quarantine at Arrowe Park Hospital on the Wirral.

February 2 – The UK Government pays for a nationwide ad campaign urging the public to wash their hands thoroughly and use tissues to help contain the spread of the disease.

Meanwhile, 11 more Britons evacuated from China touch down in the UK and are sent to Arrowe Park.

February 4 – The Diamond Princess cruise ship is quarantined off the coast of Japan with 3,700 people on board including more than 100 British citizens due to a coronavirus outbreak.

Britons in mainland China are told to leave if they can by the Foreign Office.

February 6 – A third person in the UK tests positive for the virus after contracting it in Singapore, and is treated at Guy's and St Thomas's Hospital in London.

February 8 – Five Britons test positive for coronavirus in France after coming into contact with the third case to be diagnosed at a ski resort.

February 9 – A final UK Government chartered flight bringing around 150 British nationals back from Wuhan touches down, and the passengers are quarantined at a facility in Milton Keynes.

February 10 – The Government declares coronavirus a "serious and imminent threat to public health" and gives itself powers to forcibly quarantine people.

The number of cases in the UK reaches eight.

February 22 – A repatriation flight carrying 32 British and European evacuees from the Diamond Princess touches down. Passengers are taken to Arrowe Park Hospital to be quarantined.

February 27 – The first case is recorded in Northern Ireland.

February 28 – The first case is reported in Wales.

A British man previously quarantined on the Diamond Princess becomes the first UK citizen to die from Covid-19.

February 29 – The first case of coronavirus is confirmed in the Republic of Ireland.

March 3 – The Government unveils a national plan to tackle coronavirus, including contingency plans to help police if they lose "significant numbers" to the illness.

It predicts that in a "stretching scenario", it is possible that up to one fifth of employees may be absent from work during peak weeks.

The patient, in her 70s, died in the Royal Berkshire Hospital in Reading. A second person, a man in his 80s, dies the following day.

March 11 – The Covid-19 outbreak is declared a pandemic by the WHO.

March 12 – The EU and UK scrap face-to-face talks on a post-Brexit trade deal due to the risk posed by coronavirus.

Thousands of people are believed to be infected with the virus in Britain.

March 14 – A newborn baby tests positive for coronavirus in London.

March15 – Number 10 announces daily press briefings on the progress of the pandemic.

The Foreign Office advises against all but essential travel to more than 30 countries.

March 16 – A patient in their 60s becomes the first death in Wales.

Scientists at Imperial College warn the Government that around 250,000 people will die in Britain unless stricter measures are adopted to protect the population.

Public worship suspended by the Church of England.

The Scottish government announces a £350 million support fund to help those left struggling in the wake of the coronavirus outbreak.

Schools, nurseries and colleges are told they must close their doors from the end of the day on March 20 until further notice.

March 19 – The Queen moves to Windsor Castle early to start Easter court, and is likely to remain there for the duration of the pandemic.

Prime Minister Boris Johnson claims the tide can be turned on coronavirus within 12 weeks.

March 20 – Mr Johnson orders pubs and restaurants across the country to close.

March 23 – Jury trials in England and Wales are put on hold to curb coronavirus.

The UK public is told that from this evening they will only be allowed to leave their homes for limited reasons, including shopping for food, exercise once per day, medical need and travelling for work when absolutely necessary.

All shops selling non-essential goods are told to close, gatherings of more than two people in public are banned, all events including weddings but excluding funerals are cancelled.

March 24 – A new scheme is launched to recruit volunteers to help the NHS – initially the target is 250,000, but more than half a million apply in just two days.

A new field hospital called the Nightingale Hospital with a capacity of 4,000 is being prepared at the ExCeL Centre, Health Secretary Matt Hancock reveals.

March 25 – The Prince of Wales tests positive for coronavirus but is displaying only "mild symptoms", Clarence House says.

Sweeping emergency powers to tackle the coronavirus are set to become law after clearing the House of Lords without amendment.

The UK becomes the largest single contributor in the search for a coronavirus vaccine, pledging £210 million in aid funding.

A support package for the self-employed is announced – covering an average of 80% of earnings over the last three years.

The Clap for our Carers campaign begins, kicking off a weekly national applause of appreciation for front line NHS workers.

March 27 – Mr Johnson and Mr Hancock test positive for Covid-19, while chief medical officer Chris Whitty says he has symptoms of the disease and is self-isolating.

The number of infections reaches an estimated 600,000 world-wide.

March 29 – Dr Jenny Harries, deputy chief medical officer for England, says normal life in the UK will not resume for at least six months, with social distancing measures to be gradually lifted.

April 2 – The Prime Minister comes out of self-isolation for a brief appearance at the door of No 11 Downing Street to join in the mass clapping for key workers.

Mr Hancock sets a goal of reaching 100,000 tests for coronavirus per day by the end of April.

A million confirmed cases of coronavirus are recorded across the world, according to figures collated by Johns Hopkins University in the US.

April 4 – Sir Keir Starmer is elected as the leader of the Labour Party.

April 5 – The Queen delivers a televised message to the nation, saying if we "remain united and resolute" in the face of the coronavirus outbreak, "we will overcome it".

Downing Street says Mr Johnson has been admitted to hospital for tests as a "precautionary step" as his coronavirus symptoms persisted.

The number of people who have died in hospital after testing positive for coronavirus in the UK rises beyond 5,000.

April 7 – Downing Street says the PM's condition remains "stable" and he is in "good spirits" following his first night in intensive care, but he would need to remain there for "close monitoring".

Concerns are raised over how many decisions Mr Raab is allowed to make.

Later in the day, Downing Street says Mr Johnson had been moved from intensive care back to the ward at St Thomas'.

The first patients are admitted to the NHS Nightingale hospital in London.

April 8 – A lack of protective equipment for nurses is "fundamentally compromising" the care they can give patients, the Royal College of Nursing (RCN) warns.

April 11 – The National Police Chiefs' Council says there has been a 21% drop in overall crime in the past four weeks compared to the same period last year.

Home Secretary Priti Patel says she was sorry if anyone felt there had been failings over the supply of personal protective equipment (PPE) for health workers.

April 12 – Mr Johnson is discharged from hospital and will continue his recovery at Chequers, Downing Street says.

A Number 10 spokesman confirms the PM would be taking a break from work while he recovers.

The hospital death toll of people who have tested positive for coronavirus in the UK passes the 10,000 mark.

April 14 – Mr Sunak warns the Government will not be able to protect every UK business and every household during the pandemic, adding: "These are tough times and there will be more to come."

April 15 – The National Police Chiefs' Council says more than 3,200 fines for alleged breaches of coronavirus lockdown laws were issued by police forces in England between March 27 and April 13.

April 16 – Mr Raab, still deputising for the Prime Minister, announces that lockdown measures will be extended for at least three more weeks.

April 17 – The Health Secretary describes the current level of coronavirus testing as "frustrating".

April 18 – More than 15,000 are reported to have died in hospital in the UK after testing positive for coronavirus.

April 20 – The Duke of Edinburgh makes a rare statement, praising those tackling the pandemic across the UK and keeping essential services running.

The Chancellor reveals that more than 140,000 applied to the Government's job retention scheme on the morning of its launch.

Downing Street says ministers and officials are working around the clock to ensure front line NHS staff get the correct PPE, amid mounting frustration over a lack of supplies.

Mr Raab rejects Sir Keir's accusations that the Government were slow to respond to the coronavirus crisis.

The Health Secretary says the Government will introduce contact tracing at a "large scale" as a way of easing lockdown restrictions, adding that the UK had "reached the peak" of its Covid-19 outbreak.

April 23 – Millions of people become eligible for a coronavirus test under an expansion of the testing programme for essential workers and their households, announced by Mr Hancock.

The first people are injected as part of human trials in the UK for a coronavirus vaccine, lead by Oxford University.

Some 20,000 households in England are to be contacted to take part in the first wave of a study tracking Covid-19 in the population to try and understand the current rate of infection and how many people have developed antibodies to the virus.

The UK reaches the one month mark since the start of its lockdown.