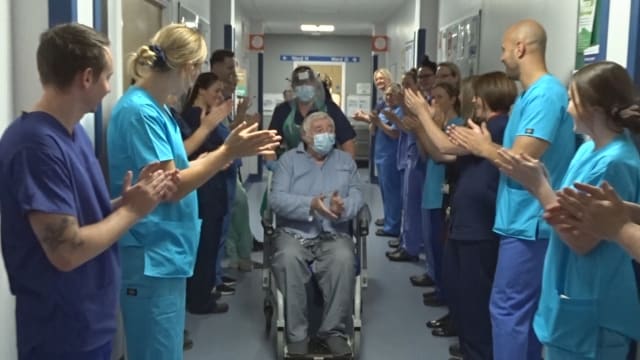 A pensioner and an NHS nurse have become the first two ventilated patients to leave a hospital in Wales after recovering from coronavirus.

Danny Egan, 73, and charge nurse David Courtney-Williams, 48, were both given a rousing round of applause by dozens of staff as they were wheeled out of Swansea’s Morriston Hospital.

Both men were said to have been “extremely unwell” during a time when they had to be placed on ventilators in the hospital’s intensive care unit.

On Tuesday, Mr Courtney-Williams, who is a nurse at nearby Singleton Hospital in Swansea, gave a thumbs up as he was clapped out by his NHS colleagues.

Within an hour Mr Egan, a retired service engineer from Port Talbot, was also clapped out of hospital following his own recovery, and told staff the first thing he would do was kiss his wife.

He said he had no memory of falling ill, and praised staff for aiding his recovery.

“We went out, my son’s birthday, and the next thing I was waking up in a ward and I didn’t have any socks on and people were trying to tell me to move my feet and I thought, ‘How can I move my feet? Where am I?’” he said.

“I don’t remember coming here, but within weeks things started moving and started going. Of course, the family weren’t here with the restrictions.

“But I have got two little grandchildren out there. I could probably pick them up today. This time last week I wouldn’t have been able to pick them up.

He added: “I don’t know what the top team is in anybody’s eyes football wise, but this has got to be it for rebuilding people. I think they could even put a chain on your bike.”

Ward H sister Kirsty Hopkins said of both men: “They were extremely unwell and were ventilated for quite a while in ITU.

“You will have seen in the media that some people are not managing to come off the ventilator, so it has been amazing to see them recover and being discharged.”

She added: “It’s a really proud moment. We have had to adapt so quickly. We are a completely different ward normally – we’re a urology ward – so going to medical looking after respiratory patients, the team have been amazing. They have really adapted well.”

Mark Madams, the hospital’s nurse director, said the discharges had “lifted the spirits” of staff who had experienced difficult times in recent weeks.

He said: “Obviously there have been some very sad outcomes. All of the clinical teams really feel each and every one of them.

“So it’s really uplifting and very supportive to the staff to know we have had some survivors from coronavirus and seeing them being discharged today really reinforces that we strive every time to give the best outcomes for patients.”