Only use safe treatment for Covid-19, expert says in response to Trump 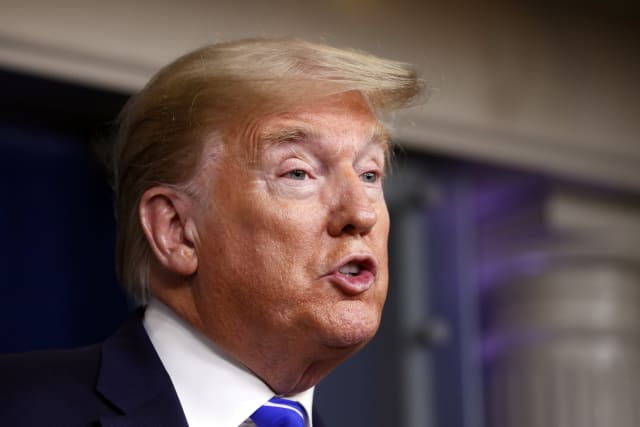 Only safe treatments should be used for coronavirus, England’s deputy chief medical officer has said, after Donald Trump suggested looking at whether disinfectants could be injected.

The US president said it would be “interesting to check” whether they could help combat Covid-19.

This prompted the company which makes Dettol to warn that under “no circumstance” should disinfectants be injected or consumed.

During a press conference, Mr Trump said researchers were looking at the effects of disinfectants on Covid-19.

Wondering aloud if they could be injected into people, he added the virus “does a tremendous number on the lungs, so it would be interesting to check that”.

However, after being blasted for his comments, Mr Trump later told reporters on Friday: “I was asking the question sarcastically to reporters like you just to see what would happen.”

“I mean, clearly we would not support, from a medical professional perspective, it is really important that people use appropriate treatments that are evidence based and tested.

“We have very good programs that have been taken up very rapidly, co-ordinated in this country testing various different alternative treatments.

“Those trials will report reasonably early, but certainly nobody should be injecting anything and we should be using evidence-based and properly trialled treatments that we know will be safe.”

Downing Street has distanced itself from the remarks, with the Prime Minister’s official spokesman confirming there were no plans to look into it in the UK following Mr Trump’s suggestion.

Hours after the US president’s comments, disinfectant manufacturer RB, the company behind the Dettol and Lysol brands, urged people not to try the method.

The company issued a statement saying: “Due to recent speculation and social media activity, RB has been asked whether internal administration of disinfectants may be appropriate for investigation or use as a treatment for coronavirus.

“As a global leader in health and hygiene products, we must be clear that under no circumstance should our disinfectant products be administered into the human body (through injection, ingestion or any other route).”

It added that all its products should only be used as intended and according to usage guidelines.

The Prime Minister’s official spokesman, asked during a briefing with reporters about whether the UK was considering looking into Mr Trump’s suggestion, said: “No, it is not something that is being looked at here.”

Probed on whether Boris Johnson thought the president’s Dettol remarks were a responsible suggestion to make, his spokesman added: “We can only speak for the UK’s response and in relation to disinfectant, I’m certainly not aware it is anything that is being recommended.

“Our approach is being driven by UK science and medical advice.”

In response to the Mr Trump’s comments, William Bryan of the Department of Homeland Security science and technology unit said health officials were not considering such treatment.

He added: “Bleaches and disinfectants are designed to kill bacteria and viruses, using relatively crude and harsh chemical methods, so by definition they would also kill human cells.

“The effects would depend upon the amount and where it is injected, but any dose would be incredibly dangerous.

“For a start, it would be incredibly painful.

“Bleach is very alkaline, and would react with the components of the cells, such as proteins, which are essential for cells to work and would thus stop them from working.”