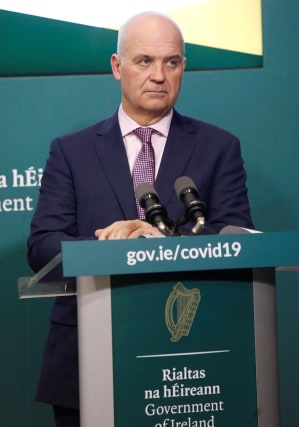 Chief medical officer Dr Tony Holohan said he could not recommend easing restrictions on movement as he warned people against becoming complacent.

Dr Holohan said: “We cannot at the last minute begin to take our foot off the gas as we could lose a lot of the progress that we have made.”

He noted evidence showed more people were moving around, but said an assessment would be made next week.

When added to confirmed cases that totalled 1,014 Covid-related deaths, the department of health said.

Dr Holohan added: “The vast majority of the public are still complying.

“It is important that we continue that level of compliance, that people continue to stick with the measures that we have in place until May 5 to give us the greatest chance of advising Government that it is time to make a change in terms of restrictions.

“We don’t believe that we are in that position.

“We are clear that significant further progress is needed in the next seven days to enable us to make that further assessment.”

Up to last Saturday evening, 24 healthcare workers had been admitted to hospital intensive care units with Covid-19 – and five have died.

Dr Holohan said: “That is not good medical advice.

“It is a very unsafe thing to do.

“There is no evidence whatsoever to support such a claim.”

The president was discussing a US study which showed bleach could kill the virus in saliva or respiratory fluids within five minutes.

Mr Trump talked about the possibility of using a powerful light on or even inside the body as a potential treatment.

He added: “And then I see the disinfectant where it knocks it out in a minute. One minute.

“And is there a way we can do something like that, by injection inside or almost a cleaning?”

Dr Holohan noted the president was not a doctor.

“This is not something that can be recommended,” he said.

“It is really unsafe and dangerous, you should not do something like this.”