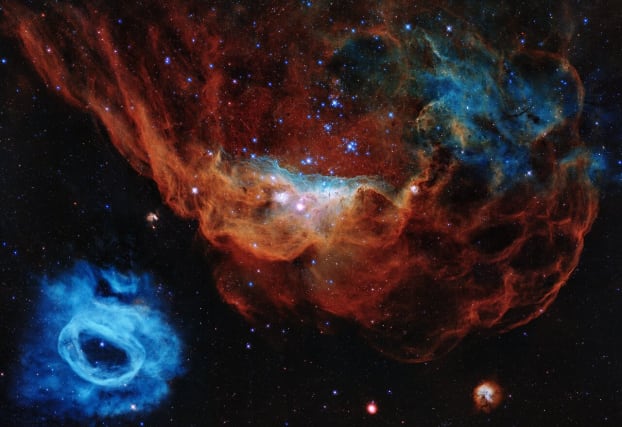 The Hubble Space Telescope has shown off a mesmerising new image from deep in space to mark its 30th anniversary.

It reveals a vast star-forming region close to the Milky Way, located some 163,000 light-years away.

The image – showing giant nebula NGC 2014 and its neighbour NGC 2020 – has been nicknamed the ‘Cosmic Reef’ because it looks like an undersea world.

Hubble was sent into low Earth orbit on April 24, 1990 to capture images and data of distant galaxies, planets and supermassive black holes deep within our universe.

It has yielded some 1.4 million observations and provided data for more than 17,000 scientific papers, according to the European Space Agency (ESA) which operates the telescope with Nasa.

However, the instrument has not been without its problems, suffering from the offset with blurred vision due to a flawed mirror.

Though it was still able to do some work in the early years, the issue was not corrected until a shuttle mission in 1993.

“The Hubble Space Telescope has shaped the imagination of truly a whole generation, inspiring not only scientists, but almost everybody,” said Professor Gunther Hasinger, ESA director of science.

“It is paramount for the excellent and long-lasting cooperation between Nasa and ESA.”