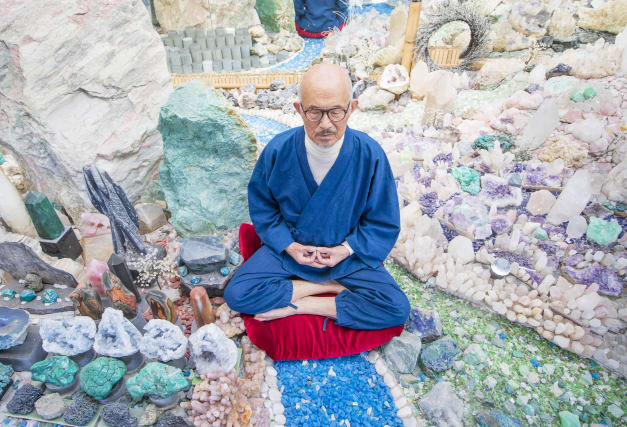 A 79-year-old former Buddhist monk has described how he is enjoying the glories of one of the most spectacular gardens in Britain alone during the ongoing lockdown.

But Buddha Maitreya is more equipped than most to endure the solitude, having devoted himself to meditation for the last 50 years.

Maitreya says his two-acre Japanese garden, which has taken him 44 years to create in rural Nottinghamshire, is at its glorious best at this time of the year.

He normally has hundreds of visitors in the spring, who come to be schooled in meditation and find peace in the garden.

More than 8,000 people visit the Pure Land Meditation Centre and Japanese Garden every year but, like everywhere, it is now closed due to coronavirus.

Maitreya said: “Hundreds of people come at this time of year because it’s at its most beautiful. But now there’s nobody.

“It’s sad people cannot share the peace and the beauty but I’m happy to be here. It’s heaven.”

He said: “After 44 years, the garden is absolutely established now, it’s complete and it’s glorious.”

Buddha Maitreya was born Koji Takeuchi, in Handa, near Nagoya, in Japan.

He said that in his teens he began a desperate search for truth and, when he turned to meditation, it changed his life. He became a meditation master and lived the life of a Zen monk for a time.

But Maitreya said he felt the monastic life was too rigid and travelled the world before ending up in Nottinghamshire. He bought the property in the village of North Clifton in 1973 as a temporary move as he hoped to move on to the United States.

But he has stayed ever since, gradually curating from nothing what he sees as a little piece of Japan in the middle of England.

“I’m in the middle of Japan once again,” he said.

Maitreya says the current crisis has left a lot of people craving the peace, happiness and “oneness” that meditation can give.

And he also thinks the virus is a lesson to the world about how humans deal with nature.

Maitreya said: “I see the present coronavirus as a grave warning from nature to mankind that we have to change the way we live now on this planet.

“The human race has created materialistic civilisation that has brought massive prosperity and wealth to the world, especially to the industrialised nations, but it is with a huge price – catastrophic exploitation, devastation of the environment, destruction of nature.”

He added: “And finally, nature turns against us, forcing us to stop economic, industrial and social activities altogether and locking down the world through the pandemic.”