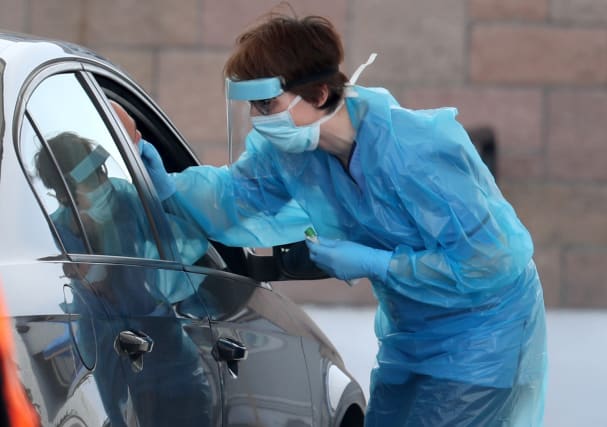 Easing the UK’s lockdown depends on the speed at which the number of new cases of Covid-19 falls and that is as yet “unknown”, Health Secretary Matt Hancock has said.

The number of new cases is being tracked through hospital admissions, a new testing study in the community announced on Wednesday, and data that will be gathered from people coming forward for tests under an expansion of the testing programme, Mr Hancock said.

But he suggested there is no prospect of easing the lockdown yet, and that coronavirus cases need to drop substantially before the next phase of isolating infected people and their contacts can be truly effective.

Through a process of mass testing and by isolating infected people and their contacts, ministers hope that future localised outbreaks of corornavirus can be kept under control.

Mr Hancock told Radio 4’s Today programme: “Now that we’re at the peak, and we very much hope that things will start to slow down and, if and when they do, then the speed with which the number of new cases reduces will frankly will determine how long we need to keep the measures on and that is as yet unknown.”

He said it was not quite the case that mass testing and contact tracing needed to be in place before the current restrictions are eased, but said contact tracing worked better when the number of infections was pushed right down.

“The truth is that we need to get the number of new cases down, right down, and the lower you go, the more effective contact tracing is because the more resources you can put into each individual case that gets a positive test.

“You can really make sure you can get hold of all of their contacts and get them, in many cases, to self-isolate.

“The smaller the number of new cases, the more effective the test, track and trace system will be.”

Social distancing was driving down the numbers, Mr Hancock said, adding that the contact tracing operation would be functioning in a “matter of weeks”.

The Government has expanded its Covid-19 testing programme to all key workers and their households if they have symptoms as it tries to hit its 100,000 tests a day target by Thursday next week.

The latest figures show just 23,560 tests were carried out in a 24-hour period, though Mr Hancock said capacity had now increased to 51,000 per day.

Under the expansion of testing, NHS and social care staff, police officers, teachers, social workers, undertakers, journalists and those who work in supermarkets and food production are among those now eligible.

People can register for a test on the gov.uk website and will receive a text or email with an appointment at a drive-through centre.

Alternatively they can request a home test kit to be posted to them, although the latter are currently in limited supply.

Test results from the drive-through sites will be sent out by text within 48 hours, and within 72 hours of collection of the home delivery tests.

– The number of people who have died with coronavirus in UK hospitals rose by 638 to 18,738 as at 5pm on Wednesday, but the total toll is likely to be several thousand higher when those who have died in care homes and the community are included.

– US president Donald Trump said Boris Johnson sounded “incredible” and  “ready to go” when they spoke on the phone this week, following reports in the Telegraph that the Prime Minister is preparing to return to work on Monday.

– Welsh First Minister Mark Drakeford will set out seven key questions which will determine when restrictions can be lifted there.

– The Duke and Duchess of Cambridge and their three children joined in the nationwide weekly clap for carers on Thursday evening.

Mr Hancock said on Friday that Mr Johnson was “on the mend” but any return to work was a matter for him and his doctors.

He told ITV’s Good Morning Britain: “I spoke to the Prime Minister yesterday.

“He’s definitely in good spirits and getting much better and so that is very good news.

“I’m sure the whole country looks forward to him coming out of his isolation.”

Asked whether there was pressure on Mr Johnson to return earlier than he was ready, Mr Hancock added: “I hope not. By his nature he is an extremely enthusiastic and hard working guy and he doesn’t like slouching.

“Of course, this is an unprecedented crisis. However, having said that, he has followed his doctors’ advice and it is down to a conversation between the Prime Minister and his doctors as to exactly when he comes back.

“The good news is he is clearly very much on the mend. He has spoken to the President of the United States, he has spoken to Her Majesty and he has been talking to those of us in Cabinet who are involved in the response.”

It comes as the UK marked a month in lockdown this week, with a review of the restrictions next due to take place on May 7.