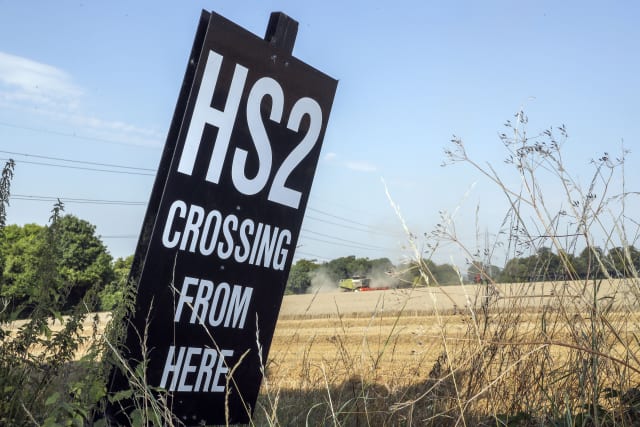 Anti-HS2 protesters are putting workers are risk by breaching social distancing guidelines near construction sites, the boss of the company developing the railway said.

Mark Thurston, chief executive of HS2 Ltd, told MPs the conduct of some demonstrators is causing “significant issues around making sure we can protect our sites and protect our workers”.

He told the Commons Transport Select Committee: “We’ve seen action by protesters that is anything but complying with the social distancing guidelines that the Government has advised.

“In a number of instances the police have even been called, which frankly is not a great use of the police at this time.”

Mr Thurston told the committee that HS2 Ltd spent two weeks reviewing which of its 200 sites on the phase one route between London and Birmingham could operate during the pandemic while adhering to Public Health England guidance relating to construction workers.

He said around 75% of sites are open “where we can be confident that we can comply with the guidelines”.

He went on: “If we can’t comply with the guidelines we will shut our sites. We will take a zero-tolerance approach with our contractors.

“Our contractors are ultimately responsible for complying with the guidelines. I’ve engaged with all of the CEOs of our key contractors. They take this very seriously.”

Last week ministers gave the official go-ahead for construction on HS2 to begin.

HS2 Ltd issued a notice to proceed to firms contracted to design and construct bridges, tunnels, embankments and viaducts for phase one between London and Birmingham.

Mr Thurston told MPs it was too early to know how the project’s schedule will be affected by the virus.

He said: “We were doing work when the pandemic really kicked in and we’ve continued to work through the last few weeks. Notice to proceed was a big decision for us. But it’s too early for us to really understand what the full impact will be.”

Prime Minister Boris Johnson gave the green light for HS2 in February, despite the plans running tens of billions of pounds over budget and several years behind schedule.

The Government-commissioned Oakervee Review warned that the final bill could reach £106 billion at 2019 prices.

Sir John Armitt, a Government infrastructure adviser, described HS2’s business case as “tricky” but insisted there is a limit to how much existing rail lines can be improved.

The National Infrastructure Commission chairman said: “There is a limit to how long we can put Sellotape and sticky stuff on a railway which was originally laid down nearly 200 years ago, and occasionally you have to build new.

“The business case is always a tricky one. Economists will always come to different views.

“We’re talking about a project which is going to be beneficial to the country for the next 75 years at least, and therefore forecasting how those long-term socioeconomic benefits are going to play out is a challenge for anyone.

“I think to a certain extent, occasionally you have to say, ‘this looks a sensible thing to do so let’s go ahead’.”