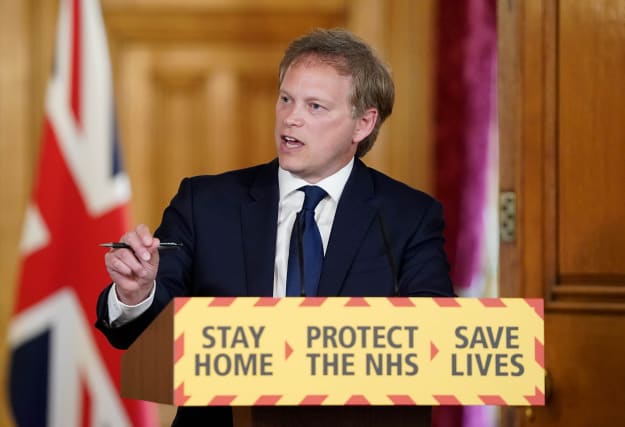 Some 46,000 people tried to book a coronavirus test on the Government’s new website on Friday, but tests ran out soon after it went live.

Over 10 million key workers and their households are now eligible for Covid-19 tests as the Government races to hit its 100,000-a-day testing target by next Thursday.

Under the expansion, NHS and social care staff, police officers, teachers, social workers, undertakers, journalists and those who work in supermarkets and food production are among those now eligible.

But within two minutes of the website going live at 6am on Friday, all 5,000 tests for people to do at home had been booked.

Meanwhile, more than 15,000 appointments for tests at drive-through centres were also taken quickly, forcing the Department of Health to apologise on Twitter “for any inconvenience”.

Transport Secretary Grant Shapps said the website will reopen for bookings later, after it was closed due to “significant demand”.

Speaking at Downing Street’s daily briefing, Mr Shapps insisted the site closed after “the slots for today were taken up”.

But he said it would come back online for more bookings on Friday evening.

Test booking slots or home testing kits will become available from 8am each day, the Department of Health has said, with their release staggered throughout the day.

Mr Shapps dismissed suggestions the website had crashed on Friday.

He said: “There were reports that the website had crashed, which it hadn’t, it was simply that the slots for today were taken up.”

He said the site had “actually been brought back up around now for more people to go and book sites, it will then close off again, more tests will become available tomorrow and so on”.

Earlier, the PM’s spokesman said: “Within two minutes of the portal opening this morning, 5,000 testing kits had been ordered.

“And that’s the available capacity for today.”

The spokesman said up to 18,000 home testing kits per day will be available by the end of next week.

It came as the Department of Health announced a total of 19,506 patients have died in hospital after testing positive for coronavirus in the UK as of 5pm on Thursday, up by 768 from 18,738 the day before.

Number 10 said the Government is trusting that those applying for tests are key workers, with no eligibility checks in place for online bookings.

The official spokesman said: “As with many other aspects of the coronavirus response, we would expect the public to respond in good faith.

“That is what they have done with other aspects of the scheme, I think we’d expect it to be the same here.”

Asked whether the Government was confident people would be able to test themselves accurately with a kit sent to their homes, the spokesman added: “There are videos available to show people how to do this and people will be given clear instructions.”

Under the scheme, test results from the drive-through sites will be sent out by text within 48 hours, and within 72 hours of collection of the home delivery tests.

Deputy chief medical officer Jenny Harries stressed the test on offer to key workers via the website was the “Have you got it now?” test.

She said it would be a “wasted test” if it was used by people who did not have symptoms, or people in their households.

Asked about a potential failure rate, she said it was difficult to put a figure on it but studies showed there were “remarkably” similar results where a person took the test themselves or if it was administered by a health professional.

Dr Harries was also asked about airport screening for tracking Covid-19 during the press briefing.

She said quarantining people returning from abroad becomes “less effective” once the prevalence of the disease balances across the world.

But she added: “What may well become an opportunity is when our rates are very tightly controlled and individuals are coming into the country.

“Even then it may not be quite as simple.”

Earlier, Health Secretary Matt Hancock, when asked whether he thought the Government would meet the target of 100,000 tests a day by next Thursday, said: “I do, yes, but nothing’s guaranteed in life.”

He also said easing the UK’s lockdown depends on the speed at which the number of new cases of Covid-19 falls and that is as yet “unknown”.

The number of new cases is being tracked through hospital admissions, a new testing study in the community with results expected in early May, and data gathered from key workers now being tested, Mr Hancock said.

But he suggested there is no prospect of easing the lockdown yet, and that coronavirus cases need to drop substantially before the next phase of isolating infected people and their contacts can be truly effective.

He said it was not quite the case that mass testing and contact tracing needed to be in place before the current restrictions are eased, but said contact tracing worked better when the number of infections was pushed right down.

“The smaller the number of new cases, the more effective the test, track and trace system will be,” he said.

– Some 28,532 tests were carried out on Thursday, the latest figures show.

– US President Donald Trump said Boris Johnson sounded “incredible” and “ready to go” when they spoke on the phone this week, following reports in the Telegraph that the Prime Minister is preparing to return to work on Monday.

– Ministers were warned last year that the Government needed robust plans in place to deal with a potential pandemic virus, according to a leaked Cabinet Office briefing.