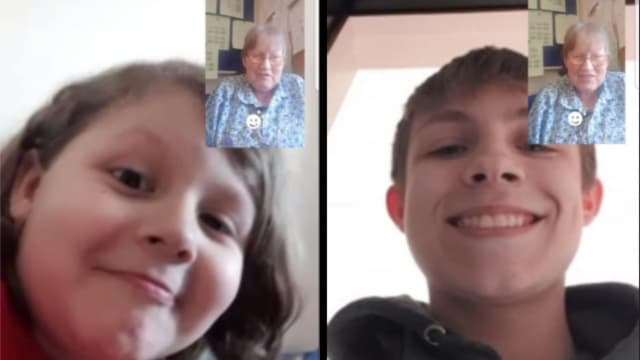 A new app could help thousands of people “adopt a grandparent” and a police officer made it to his daughter’s birth after his Covid-19 test results were fast-tracked.

Here’s a look at some of Wednesday’s more uplifting stories which you might have missed.

A care home group is creating a new app to help people link with residents, after the success of its “adopt a grandparent” video chat scheme.

CHD Living, which runs 16 care facilities, saw 72,000 people sign up to a scheme that allowed people to video call residents.

After the online initiative’s success, the care group decided to begin fundraising to create an “adopt a grandparent” app, which it hopes will launch in June.

The app, which is in its final planning stages, will open the scheme up to other care home providers, with 25 already expressing their interest in being involved.

A police officer made it to the birth of his second child after his coronavirus test results were fast-tracked.

Greater Manchester Police (GMP) neighbourhood officer Joe Burrows, from Wigan, was sent for testing by the force after showing symptoms of Covid-19.

The next day, his wife Gemma went into hospital in early labour and restrictions meant he was not able to join her.

Keen to be at the birth, Police Constable Burrows contacted Superintendent Andrea Quinton, who is organising testing for GMP, and asked if he could get his test results any faster than the scheduled 72 hours.

His results were fast-tracked, and eight hours later he was able to join his wife for the birth of his baby girl.

An 18-month-old girl has been able to hear for the first time after medics became the first in the country to switch on a cochlear implant remotely because of Covid-19 restrictions.

Audiologists at the University of Southampton set up an internet link-up in order to allow the device to be turned on for Margarida Cibrao-Roque, despite their clinic being closed to patients.

Professor Helen Cullington, of the university’s auditory implant service, conducted the switch-on from her home, linking remotely with Margarida’s parents at their home in Camberley, Surrey.

She said: “Usually we do the switch-on of a cochlear implant at our clinic at the university but, with some technical creativity and some advice from colleagues in Australia, we were able to do everything necessary over the internet.”

Thousands of pieces of personal protective equipment have been given to organisations helping vulnerable people from City of Glasgow College.

It has handed over more than 800 pairs of safety goggles, 15,000 pairs of protective gloves, 200 overalls and 3,500 protective aprons, among other items.

The PPE is usually used by students in construction, engineering, hair and beauty and healthcare courses, as well as by the cleaning staff.

The first penguin chicks of the year have hatched at Edinburgh Zoo.

People were able to spot the four Northern rockhopper chicks entering the world on the Royal Zoological Society of Scotland’s webcams.

It is hoped more will hatch over the coming weeks.