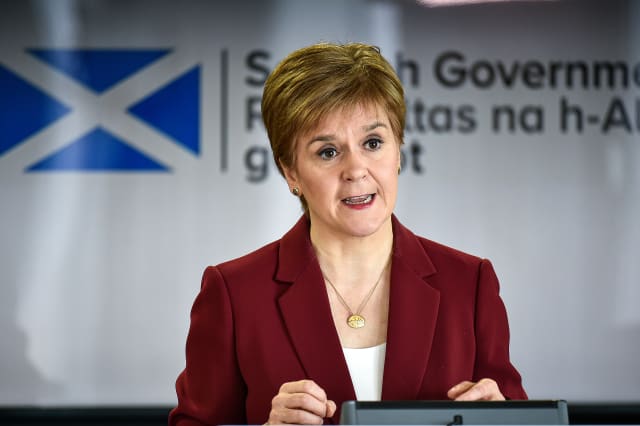 Nicola Sturgeon has given the strongest indication yet of how the UK’s lockdown measures may be eased, as she pledged to have an “adult conversation” with the public about the way forward.

Scotland’s First Minister has published a document saying the lifting of restrictions north of the border will be a phased process, with pubs among the last things to reopen, but further lockdowns are not ruled out.

The document says social distancing and frequent hand washing will need to stay in place even as people are given more freedom, with measures “at home, on the streets and in the workplace”.

There will also be enhanced “public health surveillance” – referring to the need for more widespread community testing and isolation of people with the virus and their contacts – while the country seeks “to very carefully open up parts of our economy and society”.

The document says options will include reopening parts of the economy sector by sector, and considering different restrictions depending on how the virus is spreading geographically.

But the document does not rule out the need for further full lockdowns if necessary.

It comes as the number of people who have died with coronavirus in UK hospitals rose by 638 to 18,738 as at 5pm on Wednesday, although the total death toll is likely to be several thousand higher when those who have died in care homes and the community are included.

The Scottish Government document states: “Even as we lift some of the more restrictive measures, we are likely to require continued adherence to the advice on staying at home if symptomatic and to the advice on physical distancing.

“We are likely to require that gathering in groups, for example in pubs or at public events, is banned or restricted for some time to come.

“If after easing any restrictions, the evidence tells us we are unable to contain the transmission of the virus, then we will have to re-impose them, possibly returning to lockdown with little notice.

“While we will do our best to avoid this, it is possible that such a cycle may happen more than once until we reach a point when we have in place an effective vaccine.”

The document also says people currently shielding are likely to be told to remain indoors.

“Some form of continued shielding to protect those who are most at risk will almost certainly be required as restrictions are lifted,” it said.

Ms Sturgeon said the publication is a “first cut” designed to start an “adult conversation”, and she insisted she will be “frank” with the people on her Government’s plans.

Her approach contrasts with that of ministers in England, who have remained largely tight-lipped on the measures needed to ease the lockdown.

The UK Government has said the focus must remain on the current message, which is for people to stay at home, save lives and protect the NHS.

A Number 10 spokesman on Thursday sought to play down any suggestion that the Scottish Government is taking a different approach to the rest of the UK.

“As far as I am aware, the Scottish Government have stressed that they want to continue to operate within a four nations, UK framework and align any decisions that are taken as far as possible,” the spokesman said.

Testing capacity is also being expanded at scale so that wider testing in the community can help experts track the virus as the lockdown is slowly lifted.

Scientists say that by isolating people with the virus and then tracing their contacts and isolating them, the hope is that regional outbreaks of the virus can be kept under control.

Northern Ireland plans to introduce a pilot of contact tracing next week.

Elsewhere in the UK:

– UKHospitality warned an extended period of social distancing measures could cost a million jobs in the sector.

Meanwhile, England’s deputy chief medical officer Dr Jenny Harries said the issue of whether the public should wear face masks is a difficult one.

Ministers have so far rejected calls for face masks or face coverings to be used outside healthcare settings despite other countries, including the US and Germany, recommending them.

Studies have shown mixed results over whether masks offer any protection for healthy people, with concerns that they could lead to people touching their faces more, thereby increasing their risk of becoming infected with Covid-19.

The Government’s Scientific Advisory Group for Emergencies (Sage) discussed the issue at its regular Thursday meeting, with a decision from ministers expected soon.

WHO says masks are useful in some settings, including when worn by those who are ill, but “the wide use of masks by healthy people in the community setting is not supported by current evidence”.

It says medical-grade face masks should be reserved for healthcare workers, a position currently adopted in the UK.

Dr Harries told ITV’s Good Morning Britain the fact there is a lot of debate around face masks “means that the evidence either isn’t clear or is weak”.

She said they should be worn by sick people and NHS and social care workers “but when it comes to the general public, it starts to get much more difficult”.

She added: “In some countries where the public are using them they are nearly always alongside other social distancing measures, so it is quite difficult to tease out what the effect of the mask might be.”

Dr Harries also revealed that she has suffered coronavirus, saying: “I found it a very unpleasant experience. I wasn’t well at all.”