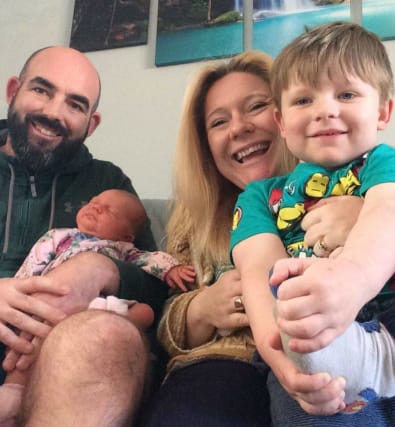 A police officer made it to the birth of his second child after his coronavirus test results were fast-tracked.

Greater Manchester Police (GMP) neighbourhood officer Joe Burrows, from Wigan, was sent for testing by the force after showing symptoms of Covid-19.

The next day, his wife Gemma went into hospital in early labour and restrictions meant he was not able to join her.

Keen to be at the birth, Pc Burrows contacted Superintendent Andrea Quinton, who is organising testing for GMP, and asked if he could get his test results any faster than the scheduled 72 hours.

Ms Quinton said: “As baby Burrows decided to make an appearance a week early, naturally Joe was really worried at potentially missing the birth of his child.

“Thankfully I was able to put the request to the National Testing Programme Team and they were able to push his test result through quickly.

“Joe received his negative test result just eight hours after my call and I am really grateful he was able to attend the hospital to be with his wife just a few short hours before his baby girl was born at 1.50am the following day.”

Pc Burrows, who works in Bolton, said: “I was slightly concerned when Gemma told me she was in labour as she wasn’t due until the following week.

“Thankfully my test results were able to be fast-tracked through and after testing negative, I was able to head into the hospital to be with Gemma just in time to welcome our beautiful baby girl Georgiana into the world.

“We already have a little boy Leo, who is two-and-a-half, so I know Georgiana could have come any moment.

“I’m so thankful that my results were able to be put through quickly and I could be with Gemma in the hospital.”

Health minister Lord Bethell said: “This heart-warming story shows another important benefit of mass testing – a huge congratulations to Pc Burrows and his family on the birth of their daughter.

“The Government is rapidly scaling up the national effort to boost testing capacity for front-line workers to protect the vulnerable and ultimately save lives.

“New regional testing sites are helping to end uncertainty of whether key workers need to stay at home, meaning those who test negatively are able to return to work.”