PC Fox on the case to rescue stricken fox from drowning 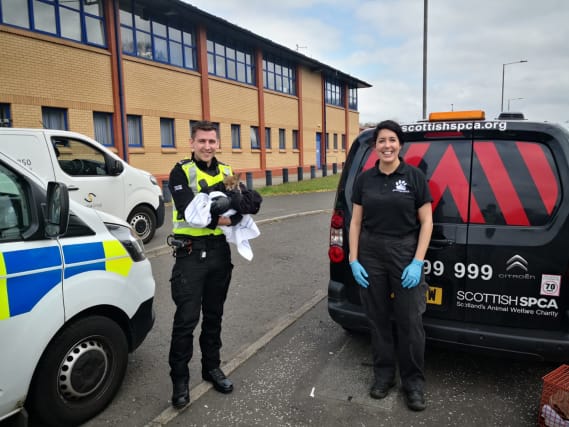 A fox cub is recovering after she was saved from drowning in a hole in a Glasgow dockyard – helped by a police officer called Robert Fox.

Members of the public rescued the young animal after spotting that she had fallen down a hole filled with water near King George V docks in Govan.

PC Fox and a colleague became involved after they noticed a gathering of people and went to investigate.

The group handed the fox cub to PC Fox, who took her to Govan Police Station where she was cared for until staff from animal welfare charity the Scottish SPCA arrived to collect her.

Scottish SPCA senior animal rescue officer Jan Toraman said: “Thankfully the cub was spotted by members of the public and it was lucky PC Fox and his colleague happened to be passing by.

“The female cub was immersed in water and was unable to get herself out of the hole.

“The members of the public rescued the young animal and handed her over to the capable hands of PC Fox.”

She added: “PC Fox transported the cub to Govan Police Station where he kept her warm by wrapping her in a towel.

“When we arrived, she was still cold and damp but if she hadn’t been rescued, she probably wouldn’t have made it.

“We immediately transferred her to our National Wildlife Rescue Centre where she is receiving the care she needs.”

The fox cub was rescued on April 17.

Last year, the Scottish SPCA cared for 50 fox cubs and so far this year have 24 in their care including this new addition.

PC Fox said: “My partner PC Cavanagh and I were pleased to be able to play our part in helping rescue the cub.

“She certainly helped put a smile on everybody’s face at the office while we waited for the Scottish SPCA and it is good to hear she is doing well.”

The charity is running a #WildlifeWise campaign, which aims to educate the public on when to leave baby animals alone in the wild and when to phone its animal helpline.

Vixens can sometimes leave their cubs when they are scavenging for food or looking for a new den.

The Scottish SPCA is asking people to monitor the cubs and check back on them over a few hours to avoid creating an orphan.