Meghan and Harry received armfuls of gifts for son Archie 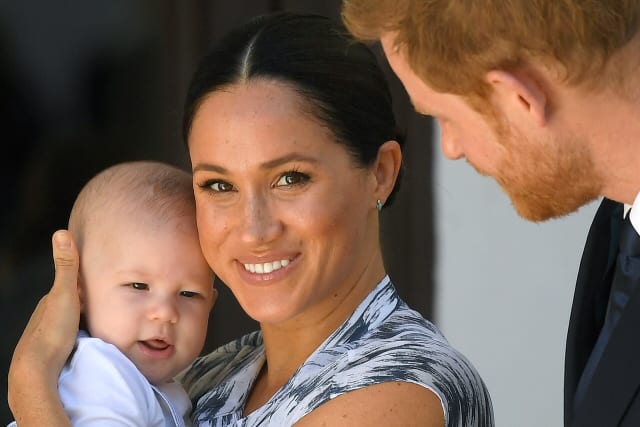 The Duke and Duchess of Sussex’s son Archie was showered with gifts during his first official overseas royal tour – receiving everything from soft toys to a pair of dungarees.

Archie Harrison Mountbatten-Windsor was just four months old when Meghan and Harry took him to South Africa last autumn and his parents were given armfuls of presents, Buckingham Palace’s 2019 list of official gifts reveals.

The Queen received 72 official presents, including one item that may prove useful for visits to the royal stud – a 24-carat gold-plated horse comb from President Borut Pahor of Slovenia.

When the Sussexes met Archbishop Desmond Tutu, a hero of the anti-apartheid movement, in Cape Town last September, the elderly cleric gave Archie two children’s books he had written – a collection of Bible stories, and Desmond And The Very Mean Word.

During the trip the youngster, who will celebrate his first birthday on May 6, was presented with 14 books in total by well-wishers, four soft toys, and two beaded bracelets.

He was also given a framed picture, hooded sweater, knitted jumper and a present for a possible future career – a pilot’s log book and two pilot’s shirts.

While in South Africa, Harry and Meghan, who now live in Los Angeles after stepping down as working royals, received a range of presents from three pairs of socks to a pair of jeans for Meghan and other clothes for the duchess.

Details of the jeans were not included in the list of official gifts but when Meghan visited Johannesburg she collected a pair of designer jeans she commissioned from one of South Africa’s up-and-coming brands.

Lesedi Masemola, manager of Tshepo’s showroom, said at the time that they had made the duchess a pair of skinny fit jeans, and when Meghan saw a pair of dungarees they had also created for Archie she described them as “very cute”.