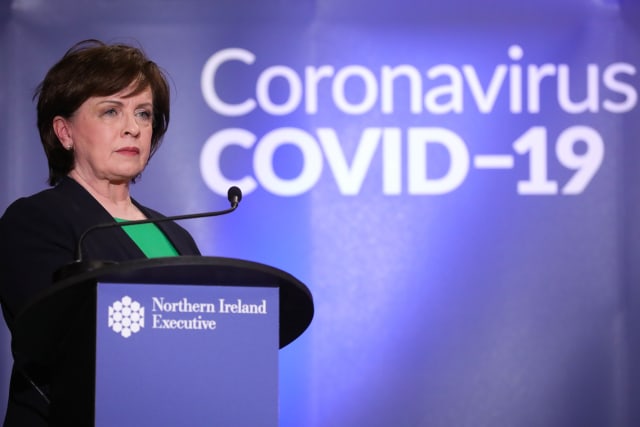 Stormont’s economy minister has called a suggestion from a ministerial colleague that some unionists were putting the economy ahead of public health, “deeply regrettable”.

Diane Dodds insisted the response to the coronavirus emergency should not be characterised as “lives versus the economy” and said it was not the time for identity or ideological politics.

Junior minister Declan Kearney prompted controversy earlier in the week when he wrote that “right-wing elements in the British Cabinet” and “some unionists in the north of Ireland” were encouraging a relaxation of coronavirus restrictions.

Economy Minister Ms Dodds was asked about the comments, which were made in the republican newspaper An Phoblacht, at Thursday’s Covid-19 briefing.

“It was a very regrettable intervention by the junior minister – this is not the time for either identity or ideological politics,” she said.

“We quite rightly all want to preserve life. That has been our focus since the beginning of this pandemic.

“There are many people across all communities who are feeling the pain of Covid 19 and we need to ensure the first and foremost priority we have is to set aside difference and to ensure we protect and save lives.

“That has been our focus, that has been the focus of everyone so far and thankfully that actually is the focus of communities in Northern Ireland, who have sacrificed enormously in order to comply with the regulations.

“So I want to absolutely make it clear that saving lives is important, this is not a matter of lives versus the economy.

“Saving lives is our utmost priority, but we too must protect the economy and plan for a safe and phased and step-by-step transition back to normality.”

He told BBC NI that the economic and physical health of the UK were interlinked and not “mutually exclusive”.

“All our decisions at every stage of this virus have been around the medical and scientific advice, about what is in the best interests of the health of the people in this country,” he said.

“The economic side is why we have put such a big package of support out there for businesses and the NI executive has been doing their work around that.”

He said a balance had to be struck between protecting the economy and public health measures. But he insisted the executive’s overriding priority was saving lives.

“I’ve no doubt there are debates going on across the western world in relation to which takes priority – the undoubted damage that is being done towards the economy and to business, set against the objective of saving lives,” he said.