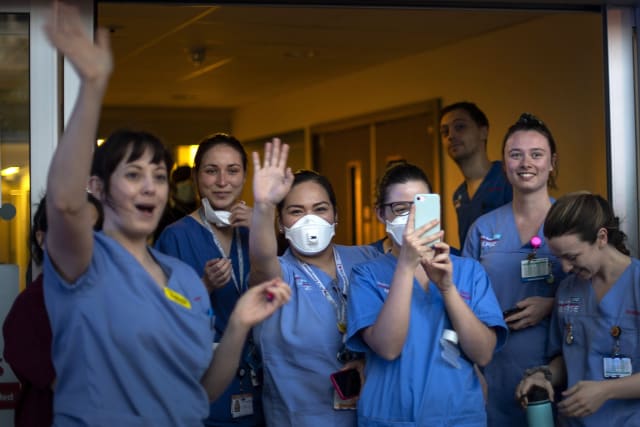 Millions of key workers and their households are now eligible for coronavirus tests as the Government races to meet its 100,000 daily target by the end of next week.

Health Secretary Matt Hancock announced that people whose work is critical to the Covid-19 response, and those they live with, will be able to register for a test if they have symptoms.

NHS and social care staff, police officers, teachers, social workers, undertakers, journalists and those who work in supermarkets and food production are among those now eligible.

The announcement came as researchers at the University of Oxford began human trials for a potential coronavirus vaccine candidate.

– The number of people who have died with coronavirus in UK hospitals rose by 638 to 18,738 as at 5pm on Wednesday, but the total toll is likely to be several thousand higher when those who have died in care homes and the community are included.

– Ministers came under further pressure to set out the Government’s lockdown exit strategy after Scotland’s First Minister Nicola Sturgeon said the lifting of restrictions north of the border would be a phased process.

– Welsh First Minister Mark Drakeford will on Friday set out seven key questions which will determine when restrictions can be lifted.

– The Government’s chief scientific adviser Sir Patrick Vallance said the evidence on face masks “has always been quite variable, quite weak and difficult to know”, as ministers review the recommendations of Sage, the Scientific Advisory Group for Emergencies.

– An RAF plane understood to be carrying further personal protective equipment (PPE) from Turkey landed at Brize Norton in Oxfordshire on Thurday, with at least one more flight expected to arrive overnight.

– The Duke and Duchess of Cambridge and their three children joined in the nationwide weekly clap for carers on Thursday, as more than £27 million was donated during BBC One’s charity special The Big Night In, with the Government promising to double the total.

Mr Hancock set out his plans for “easier, faster and simpler” testing so that more people can access a Covid-19 test to tell them whether they have the virus.

He said people can register for a test on the gov.uk website.

People will then receive a text or email with an appointment at a drive-through centre or can request a home test kit, although the latter are currently in limited supply.

A help desk has been established to aid the process, while mobile units run by the Army are travelling around the country to where they are needed, such as care homes.

Test results from the drive-through sites will be sent out by text within 48 hours, and within 72 hours of collection of the home delivery tests.

At the daily Downing Street briefing, Mr Hancock said the capacity for carrying out tests was now “ahead of our plans”, with the ability to carry out more than 51,000 tests a day.

“Because capacity has now increased so substantially, we are now able to expand who can get the tests,” he said.

“Our ultimate goal is that everyone who could benefit from a test gets a test.”

The Health Secretary also said he was proud of the way the public had responded to the demands of the social distancing regime, and praised the police for their work in enforcing them.

Ahead of a weekend of warm and sunny weather, Mr Hancock said: “I’ve also seen reports of the police stopping people from having barbecues on the beach and making sure that people follow the social distancing rules.

“That’s because the rules are there for a reason and that’s because we need to follow the rules in order to protect the NHS and to slow the spread of this virus.”