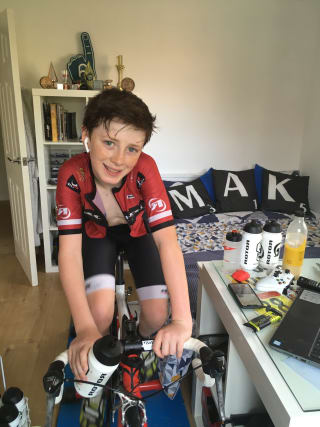 Mak Larkin, from Hastings, East Sussex, set himself the target of riding three 12-hour shifts with the Olympic gold medallist using the indoor cycling app Zwift to raise money for NHS Charities Together.

His mother, Lynsey Larkin, told the PA News agency that her son, who races for the Rotor Race Team and competes nationally, was determined to complete the ride.

She said: “Day two was the hardest for him, legs were aching and saddle sore had definitely kicked in, we said to stop but he was adamant he wanted to see it through, even through the tears.”

Mrs Larkin said that Mak received messages of support from around the world, including from from cyclists such as Tom Pidcock, Cameron Mason, Ben Tulett and Team Ineos, and a tweet from Thomas who completed 1,200km and raised £360,000.

On her son finishing the challenge, Mrs Larkin added: “He was overwhelmed and couldn’t believe he had actually done it. He rested but was eager to get back on the saddle for a gentle spin 48hrs after.”

Mak’s fundraising page can be found at: https://uk.virginmoneygiving.com/MakLarkin